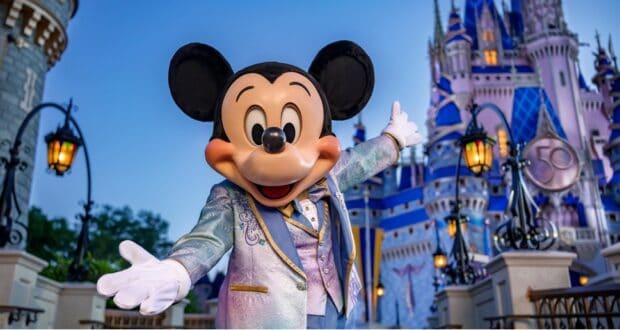 Top New Experiences Not to Miss For Disney’s 50th Anniversary

Walt Disney World’s 50th Anniversary is upon us! As we cruise into this new week, there is much 50th excitement brewing at all of the Disney World Parks and Resorts. Check these top new experiences not to be missed as we prepare for October 1, 2021!

This week we say goodbye to “Happily Ever After” with its final performance on September 29. Magic Kingdom’s new nighttime spectacular: “Disney Enchantment” will debut on October 1. Disney has said “This all-new spectacular inspires everyone to believe in magic, with captivating Disney music, enhanced lighting, immersive projection effects that extend for the first time down Main Street, U.S.A., and an emotional original song, entitled “You Are the Magic”. We’ve recently seen a sneak peek of the Main Street, U.S.A. projections and simply can’t wait to see them in person. Plus, with the new show, the Magic Kingdom fireworks dessert party is back with three-party options.

Not only is Disney Enchantment on the way in, but we will welcoming EPCOT’s new nighttime spectacular, “Harmonious” which will debut on October 1 as it replaces the temporary show, “EPCOT Forever”. Disney has said, “Harmonious illuminates our shared humanity, bringing to life the vision of EPCOT through a celebration of our world and its promise.” It is also said to be one of the largest nighttime spectaculars Disney has ever created! If you’re looking for a great viewing opportunity around the World Showcase lagoon, Disney has two dining packages that offer viewing for Harmonious.

EPCOT is introducing a new attraction on October 1! Located in the World Showcase France Pavilion, Guests will have a chance to shrink down to the size of a rat and scurry along with Remy and friends in the new attraction, Remy’s Ratatouille Adventure. Keep in mind, you must obtain a virtual queue via the My Disney Experience App to ride Remy’s Ratatouille Adventure.

Disney’s Animal Kingdom is getting in on the 50th Anniversary action with a new daytime show called “Disney KiteTails“. Disney has said, “Disney KiteTails” will take the magic of nature and Disney storytelling to new heights, immersing everyone in a gala performance of color and movement at Disney’s Animal Kingdom Theme Park.” The show will take place in the Discovery River Amphitheater, near DinoLand U.S.A. We’re ready to see these colorful kites fill the sky! Showtimes have been announced so you can plan ahead.

Probably one of the 50th Anniversary experiences we’re most intrigued to see is the Beacons of Magic. This is where all four Park icons, including Magic Kingdom’s Cinderella Castle, EPCOT’s Spaceship Earth, Disney’s Hollywood Studios Tower of Terror, and Disney’s Animal Kingdom Tree of Life will glow with special lighting. Disney has said a new song will connect all four Parks: “The Magic Is Calling” will connect to all four parks, as different arrangements of the song will be heard when each Walt Disney World theme Park icon transforms into a magnificent Beacon of Magic at night, beckoning all to come and celebrate. Cinderella Castle, Spaceship Earth, Hollywood Tower Hotel, and the Tree of Life will each shine like never before and come to life on select nights with their own unique EARidescent glow.”

With many of the Disney Fab 50 character collection statues already in place, we’ve been wowed by the golden sculptures that have been placed around Walt Disney World’s four Parks. Get ready to scavenger hunt through each Disney Park to track down the Fab 50 characters in golden statue form. The full list of characters and where they are located can be found here.

Calling all Disney foodies! Of course, Disney hasn’t forgotten to fill the Parks with new food along the way! We suspect special 50th Anniversary treats will be arriving throughout the Parks. Disney recently announced the renovated Main Street Confectionery will be reopening on September 29. Keep in mind, Disney has also introduced Mobile Order for select sweets and treats are various locations. Over at EPCOT Space 220 is now welcoming Guests and is as popular as it was expected to be. EPCOT’s La Crêperie de Paris will officially open to the public on October 1 in the France Pavilion near the new Remy’s Ratatouille Adventure attraction. Plus, California Grill at Disney’s Contemporary Resort is dishing out a special 50th Anniversary menu that is sure to delight.

No Virtual Queue for Star Wars: Rise of the Resistance

While Disney’s Hollywood Studios doesn’t have a new fireworks show or attraction opening for the 50th, there is one adjustment Guests visiting for the 50th should be aware of. Currently, Disney has put a “pause” on the virtual queue for Star Wars: Rise of the Resitance. This popular attraction is now a standby line experience only. Why the change? We aren’t sure but rumors suspect it has something to do with the incoming “Lighting Lanes“. For now, the only virtual queue on the 50th will be Remy’s Ratatouille Adventure unless Disney decides to make a last-minute change.

RELATED: Disney Resort Guest? You’ll Soon Be Able to Ride Rise of the Resistance Before Others

As if a new nighttime spectacular isn’t enough, Disney has also added the return of the “Let the Magic Begin” welcome show to Magic Kingdom’s showtimes. This welcome show takes place in front of the Cinderella Castle and boasts numerous Disney characters welcoming Guests to the Park with a brief 5-minute stage show. Plus, over on Main Street, U.S.A., Guests will only again hear Casey’s Corner Pianist tickling the ivories as Disney has added pianist showtime hours to the schedule.

The nostalgic Electrical Water Pageant that cruises through the Seven Seas Lagoon nightly is getting a 50th upgrade! Disney has said, “The Electrical Water Pageant joins the fun of “The World’s Most Magical Celebration” with new celebratory scenes featuring a version of the celebration anthem song, “The Magic is Calling,” bookending the full traditional show as it sails nightly.” We can’t wait to see this one!

50th Anniversary decor simply can’t be missed! The Cinderella Castle transformation at Magic Kingdom Park is probably one of the most spectacular forms of 50th Anniversary decor you’ll spot. The entrance to Magic Kingdom also has a special cake decoration with Mickey and Minnie, and more. 50th Anniversary banners have appeared at each Park, and Walt Disney World transportation has received 50th anniversary wraps on the Monorail, buses, and even the Skyliner! Plus, popcorn packaging is now special for the 50th. And of course, we must mention the Disney characters! Mickey, Minnie, Goofy, Donald, Daisy, and Pluto have all gotten dressed up for the special occasion with the new “EARridescent” look!