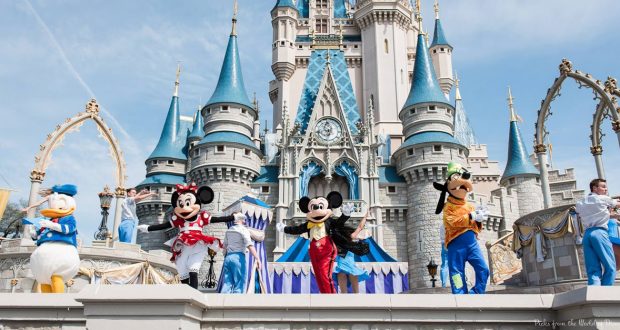 More exciting news to share as we are just DAYS away from the official kick-off of Walt Disney World’s 50th Anniversary celebration known as “The World’s Most Magical Celebration.” Not only are we preparing for new nighttime spectaculars such as Disney Enchantment at Magic Kingdom Park and Harmonious at EPCOT, but there are also so many more experiences arriving such as the Remy’s Ratatouille Adventure, the Disney Fab 50 Character Collection, and Disney’s Animal Kingdom “Disney KiteTails“. With all of the excitement launching on October 1, 2021, you can expect the 18 month-long festivities to be memorable. And now, we are learning of another new exciting piece of the 50th Anniversary puzzle. Magic Kingdom’s “Let the Magic Begin” will be returning!

For all those early risers that make it to Magic Kingdom Park before it officially opens, you’ll be invited into the Park’s Main Street, U.S.A. as usual. In pre-COVID days, “Let the Magic Begin” would invite Guests to gather into the hub of the Park to join with Mickey Mouse and friends for a brief 5-minute show in front of Cinderella Castle. When the Park reopened, the welcome show was no longer available, leaving the “rope drop” experience rather uneventful. That is all about to change! According to the Walt Disney World website, “Let the Magic Begin” will return on October 1, 2021, as noted in the screenshot below:

The Walt Disney World website describes “Let the Magic Begin Welcome Show” with: “Start the Day in a Memorable Way. Just before Magic Kingdom Park officially opens, make your way down Main Street, U.S.A. to the front of Cinderella Castle. Soon, the sound of trumpet fanfare bursts through the morning air, signaling the arrival of the Royal Herald. There, you’re greeted by Mickey Mouse himself—along with a special Disney surprise you’ll have to experience to believe!”

We’re thrilled to see the return of the welcome show and are curious what changes may be in place, if any, to the previous show which began in January 2017. You may remember, “Let the Magic Begin” replaced the former welcome show that was held at the Main Street U.S.A. Train Station prior to letting Guests enter the Park early. Now, instead of large crowds gathering outside of the Park gates, Disney allows Guests to enter the Park to shop and eat through Main Street, U.S.A. before the Park officially opens.

You’ll want to keep in mind that beginning October 1, all Walt Disney World Hotel Guests are invited to enter all Parks with a 30-minute “Early Entry” access. For example, if Magic Kingdom Park opens officially at 9:00 am, any Resort Guests are allowed to begin to enjoy select attractions at 8:30 am, before non-resort Guests. Because of this early entry, if you are a Resort Guest, you may miss the “Let the Magic Begin” as you’ll be allowed to head off to ride attractions. Of course, you can always decide to stay in the hub area to enjoy the brief show.