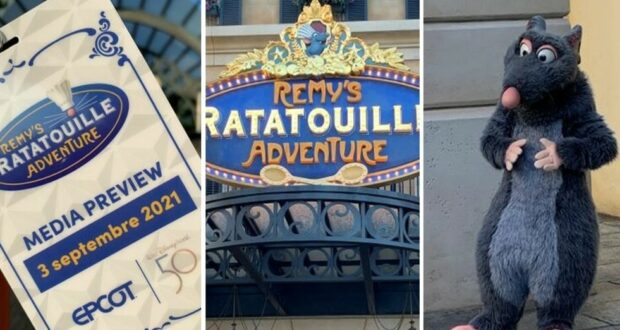 I was invited by Disney to be part of a media preview for Remy’s Ratatouille Adventure on September 3. We were able to experience the new ride, as well as dine at La Creperie de Paris. This is all part of the France Pavilion at EPCOT. The new section fits in perfectly.

I’ll start with the ride. If you haven’t watched “Ratatouille” recently I would recommend it, because the story of the ride comes directly out of the movie. That said, even if you aren’t familiar with it, you will have a great time. The queue takes you to the beginning of the ride’s story. If you use your imagination you will feel as if you’re in Paris! A virtual queue will be used when the ride opens, although there is a single rider lane and a lane that still has a FastPass+ sign. Since those signs are changing to Lightning Lane all over the Walt Disney World theme parks I suspect that will be gone before the ride officially opens. Check out a video walkthrough of the queue here.

In the ride itself, you will shrink down to the size of a rat. That is what your ride vehicle is shaped like as well. The ride is 3D, and if you have problems with motion sickness you might want to proceed with caution.

Speaking of the 3D, it is very well done. The picture is crisp and clear, and it makes it feel as if the area is larger than it really is. I did look without the glasses a few times, and the picture wasn’t too blurry. This isn’t Muppet*Vision 3D.

I don’t want to give away too much about the ride, but I will tell you a few things that you’ll want to know. The ride vehicles spin, but it isn’t rough at all. There are a couple of very minor water effects. There are two times when it might feel as if you are dropping, but it isn’t a drop at all. It’s a similar sensation to the waterfall on Mickey & Minnie’s Runaway Railway.

Is Remy’s Ratatouille Adventure on par with something like Rise of the Resistance? No, I don’t think so. It’s still adorable, and it’s a great addition to the France Pavilion at EPCOT. It’s a fun ride, and I look forward to riding again for my Annual Passholder preview.

We were also treated to a meal at La Creperie de Paris. My server was B, and she was a credit to her job! She was friendly, professional, and knowledgeable. I had the savory Ratatouille Galette (buckwheat crepe) and sweet Melba Crepe. The Ratatouille was filled with flavor and fresh ingredients. It’s a simple combination of tomato, zucchini, and eggplant. I would order this again without hesitation. The Melba is filled with peaches, berries, and almonds. This was also flavorful, and I was happy that it wasn’t overly sweet. A friend ordered the Saumon (salmon) savory and Gourmande (hazelnut chocolate spread and whipped cream) and he told me he was happy with his choices. This is going to be a great new option once it’s open to the public. There will be a Prix Fixe choice once the restaurant has officially opened, for $33 it’s not a bad deal. You will also be able to order a la carte. The new quick-service location, Crepes a Emporter, was not open when we were there.

There is plenty of merchandise to celebrate the new ride, and we were shown some of it. The Remy Feature Plush speaks both English and French. The cheese necklace glows in the dark. There are kitchen items, such as a Remy kitchen timer. I can’t decide which I liked better; the Remy and Emile Wearable Remote Control Buddies or the Chef’s Hat with Remy inside (video of Chef’s Hat with Remy inside here!). The mouse headband doesn’t feature Mickey or Minnie this time! These are just a few of the creative items that we previewed.

Part of what makes the new area so special are the little details that most people will never notice. The wine bottles in a window have important years on them. The same bottles have a picture of the critic from the film, and the wine is called Chateau Ego. You might notice a familiar scooter against the wall after you exit the ride. These are just a couple of things to keep your eyes open for. Ask a Cast Member about the details when you arrive, I’m sure that there were be plenty of things that he or she can point out.

Aside from the ride, there is one thing that is impossible to miss in the new part of the France Pavilion. There is a fountain that you will walk past on your way to get in line. This fountain is so creative! Remy is on top, and you’ll see some of his siblings as well. There are also champagne bottles as part of the fountain. Look closely, because the water that comes out of these bottles bubbles like champagne. It’s a great effect.