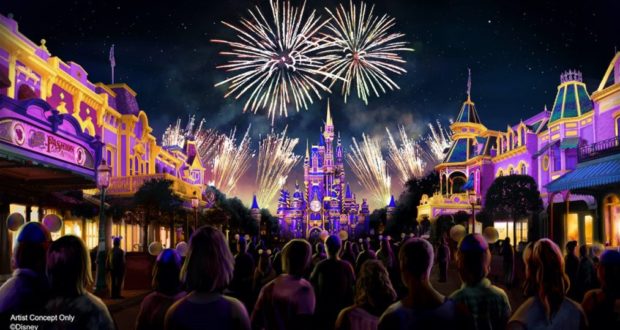 This week has been FULL of Walt Disney World Resort news! Earlier this week we learned about the new Disney Genie and paid “Fastpass” program coming to Walt Disney World and Disneyland. Today, Disney has been sharing loads of Disney food news including the reopening of Boma – Flavors of Africa at Disney’s Animal Kingdom Lodge (the first Disney buffet to open since the pandemic), the return of two more buffets at Magic Kingdom and EPCOT, an announcement about a new restaurant coming to Disney’s Contemporary Resort, and even new breakfast options arriving soon. Now the theme Park is sharing one of the most exciting pieces of news from today by revealing details about the new Magic Kingdom fireworks and nighttime spectacular called “Disney Enchantment”.

Disney has revealed new details about the previously announced “Disney Enchantment“! Soon enough we will be saying goodbye to “Happily Ever After”, as Magic Kingdom’s newest nighttime spectacular “Disney Enchantment” takes center stage above Cinderalla Castle and throughout Main Street, U.S.A. Check out the latest details below as shared by Disney.

“This all-new spectacular inspires everyone to believe in magic, with captivating Disney music, enhanced lighting, immersive projection effects that extend for the first time down Main Street, U.S.A., and an emotional original song, entitled “You Are the Magic”.

“In “Disney Enchantment,” we join dreamers like Tiana, Miguel, Rapunzel, and brothers Ian & Barley from “Onward,” and we set out on an incredible journey with adventurers such as Moana, Raya, and Judy Hopps. Joe Gardner from Disney and Pixar’s “Soul” takes us into “the zone,” where we discover a whimsical world inspired by the style of legendary Disney artist Mary Blair and filled with beloved characters from classic stories like “Beauty and the Beast” and “Alice in Wonderland” to contemporary tales including “Luca” and “Wreck-It Ralph.” Everything builds to a climactic moment, as Tinker Bell takes flight, spreading shimmering gold pixie dust and empowering us all to believe in ourselves and the magic all around us.”

We’re loving the lineup of Disney films involved! It seems like Disney has kept several classics but will really be integrating some of the newer Disney films as well. And yes, it sounds like Tinker Bell will continue to fly through the sky!

Having fireworks back at Magic Kingdom has been fantastic, but “Disney Enchantment” isn’t the only nighttime spectacular we are looking forward to. Another Disney Park is preparing for the big debut of “Harmonious”. That’s right – EPCOT is saying goodbye to EPCOT Forever and preparing for their new nighttime spectacular to light up the World Showcase lagoon. Harmonious is scheduled to debut on October 1.