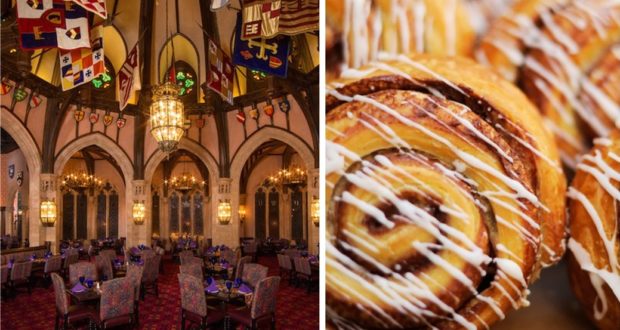 It’s a good day to be a Disney food fan! We previously shared the news that two Walt Disney World all-you-care-to-enjoy buffets are returning including Magic Kingdom Park’s The Crystal Palace and EPCOT’s Biergarten Restaurant. That news fell on the heels of the reopening of Boma Flavors of Africa which took place today, August 20, as the first buffet to reopen since the pandemic at Walt Disney World. Disney is now sharing exciting news about the most important meal of the day – BREAKFAST! Two Disney breakfast locations are returning to help us get the day going with a delicious meal.

One of our very favorite ways to enjoy breakfast is to snag a delicious bite from Kusafiri Coffee Shop and Bakery at Disney’s Animal Kingdom Theme Park. Disney has shared it will reopen on August 29 and will have delicious new entrées to try while traveling through the Park. Did you know “kusafiri” means “to journey” in Swahili?

Keep in mind that neither of these options offers a character breakfast. Kusafiri is a quick-service restaurant, and while Cinderella’s Royal Table previously offered a character meal at Magic Kingdom, currently that is not available. If you’re looking for character dining for a Disney breakfast, you’ll want to check out restaurants such as Chef Mickey’s at Disney’s Contemporary Resort or Topolino’s character breakfast at Disney’s Riviera Resort.

Will you be making a “kusafiri” on over to these fantastic breakfast options? Check out Disney’s menus before visiting so you’ll know exactly where to find the must-dos like the Mickey waffle (Cinderella’s Royal Table) and a massive cinnamon roll (Kusafiri). Just be sure to snag your breakfast dining reservations at Cinderella’s Royal Table as soon as possible as they will surely go fast!