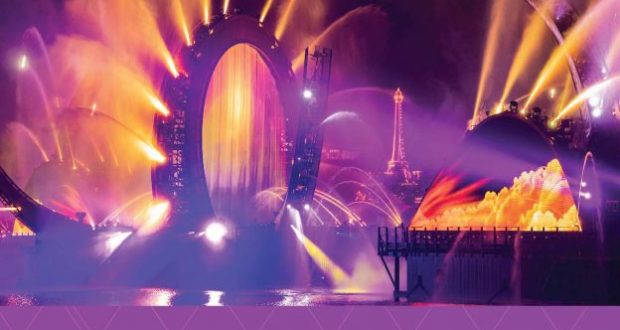 It’s hard to believe after months of eagerly awaiting, we’re only a little over 60 days away from celebrating Walt Disney World’s 50th Anniversary called “The World’s Most Magical Celebration“. On October 1, the 18-month long celebration kicks off! Magic Kingdom’s new nighttime spectacular, Disney Enchantment, will debut – but there is also plenty of magic scheduled to debut at EPCOT. Not only will Remy’s Ratatouille Adventure attraction open in the France Pavilion, but we’ll finally be able to experience EPCOT’s new nighttime spectacular, “Harmonious”. Disney has said this will be the biggest nighttime spectacular they have ever revealed! We’re thrilled Disney has now released more details and a first look video into “Harmonious”.

As shared by Disney: ““Harmonious” illuminates our shared humanity, bringing to life the vision of EPCOT through a celebration of our world and its promise. Over the years, cultures from around the world have provided inspiration for Disney films and music. In “Harmonious,” a global community of musical artists has come together and reinterpreted those familiar stories and songs in their own voice, honoring their respective cultures. Collectively, they contribute to a unique experience that could only happen at EPCOT, a place where the impossible becomes possible through the power of human imagination and the magic of Disney. The show moves through three distinct chapters, inviting us to gather on the shores of World Showcase Lagoon, celebrate the countries and cultures of the world, and ultimately unite to create a bright tomorrow. “Harmonious” begins with a sunrise, and as the world awakens around us, we set out on a journey that takes us across the globe. It’s a dazzling and diverse feast for the eyes and ears, from the South Pacific home of “Moana” and a Middle-Eastern interpretation of “Aladdin” to “The Jungle Book” in India, China’s legend of “Mulan,” the European nations that inspired “Brave” and “The Hunchback of Notre Dame,” and so much more.”

Ready to take a first look at the new nighttime spectacular? Here’s a video shared by Disney:

Absolutely stunning! Are you planning to visit EPCOT on or soon after the October 1 “Harmonious” debut? We simply can’t wait! We’ll keep you posted as Disney shares more about the nighttime spectacular as we inch closer to October 1.

2021-07-28
Jamie Sylvester
Previous: Throg To Return In Season 2 of Loki
Next: Is Sylvester Stallone Returning for ‘Guardians Of The Galaxy Vol. 3’?