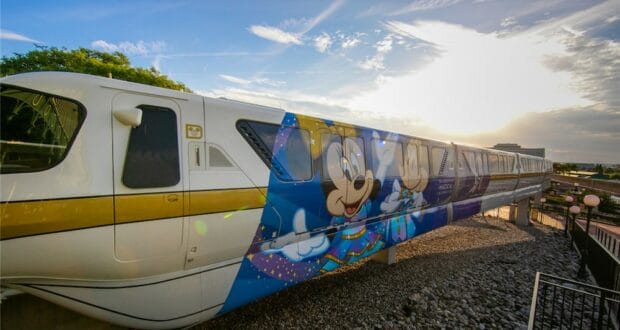 With less than 20 days away from Walt Disney World Resort’s 50th Anniversary celebration kicking off on October 1, we’re seeing more and more exciting additions arrive at the Parks, Resorts, and surrounding areas. The “EARidescent” look is in full swing as Cinderella Castle sparkles with new decor and even Disney characters prepare for the big 50th anniversary with new outfits. We simply can’t wait to experience the new nighttime spectacular including “Disney Enchantment” at Magic Kingdom and “Harmonious” at EPCOT. Plus, the Disney Fab 50 golden sculptures have begun to take their place throughout Magic Kingdom. With all this excitement, Disney isn’t forgetting to “dress up” their complimentary transportation. Now the Disney Monorail is sparkling for the 50th!

If you’re driving to Magic Kingdom Theme Park for the day, you may have a chance to ride one of their 50th wrapped Monorails when leaving the Transportation Ticket Center (AKA Magic Kingdom’s parking lot), and heading to the Park. You may also spot the wrapped Monorail if staying at one of the Magic Kingdom Resorts including Disney’s Contemporary Resort, Disney’s Grand Floridian Resort, and Disney’s Polynesian Resort. Even though construction has been in the works at the Monorail station at Disney’s Polynesian Resort, the station is now open and welcoming Guests! You may also see the new Monorail wrap cruising through EPCOT. Such a fun addition to the monorail system! Bring on October 1, 2021!