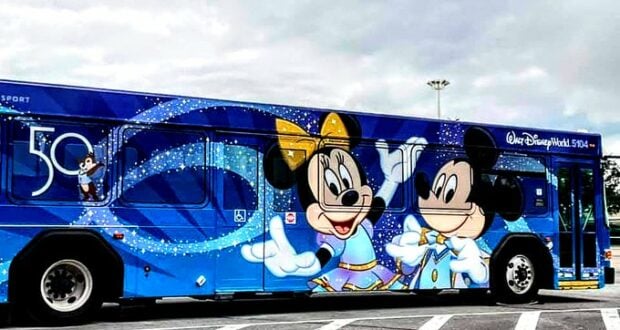 The Twittersphere is alive and well this morning and over the past day or two with photos of the brand new 50th Anniversary Celebration wrappers for Disney World buses and Skyliner gondolas, and so far, we think we like them!

Disney World buses feature a bright blue background and Mickey and Minnie in their 50th Anniversary Celebration outfits, and the numbers 5 and 0 are easy to spot as well. We love the swirls of 50 years of magic along the length of the bus too!

Here’s a look at the bus in motion, thanks to @CUL8RTrashCanss

@ScottGustin shared these photos of the 50th Anniversary Celebration wraps for the Skyliner gondolas, complete with the words, “The World’s Most Magical Celebration” and, of course, the “50” where everyone can see!

It doesn’t look like every gondola is getting the 50th-anniversary special treatment.

Most of the photos we’ve seen feature only a yellow Skyliner gondola with the new wrapper. Whether that’s because it takes some time to get the wrappers on approximately 300 gondolas or because Disney World has decided to only outfit some of the gondolas with the wrappers, we aren’t sure yet. It’s still a few weeks until the anniversary.

The newly-designed wrappers for both the Walt Disney World buses and the Skyliner gondolas have only been out for a couple of days and are just another part of the “World’s Most Magical Celebration,” commemorating the 50th anniversary of Walt Disney World on October 1. 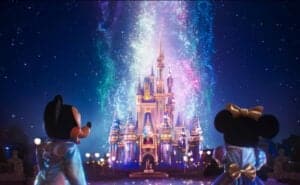 The excitement over the upcoming anniversary celebration continues to build, and more surprises are in store for Walt Disney World fans.

What do you think about the wrappers for the buses and gondolas? Do you think Disney will continue with wrappers on more gondolas? Let us know your thoughts and what you like or what you’d change about the new designs.