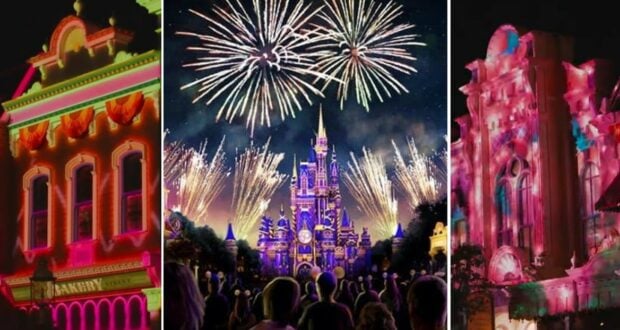 We previously shared the exciting news that we’ll all have an opportunity to watch two new Disney Park nighttime including “Harmonious” at EPCOT and “Disney Enchantment” at Magic Kingdom BEFORE their official debut on the 50th Anniversary celebration on October 1st. Disney will now be live streaming the two spectaculars on September 29 and September 30. With the news of the special early 50th Anniversary live streaming, Disney also released a video of the behind-the-scenes work that has been taking place to create Magic Kingdom’s “Disney Enchantment”. While art renderings have shown Magic Kingdom’s Main Street, U.S.A. is now getting in on the action, the video provides a sneak peek of what the projections actually look like as they take over the Theme Park buildings on Main Street, U.S.A.

As you can see in the artist’s rendering of Disney Enchantment above, Cinderella Castle won’t be the only structure to get in on the nighttime spectacular projections. Disney has said, “Be swept up in a world of wonder filled with friendship, love, and fun as you watch this nighttime spectacular unfold. Inspiring everyone to believe in magic, Disney Enchantment will feature captivating Disney music, enhanced lighting, stunning fireworks, and—for the first time—immersive projection effects that extend from Cinderella Castle down Main Street, U.S.A. at Magic Kingdom Park.”

Disney Parks takes to YouTube to share a Behind The Scenes – Making Of ‘Disney Enchantment’. “In “Disney Enchantment,” you’re inspired to believe in magic, with captivating Disney music, enhanced lighting, and immersive projection effects that extend – for the first time – from Cinderella Castle down Main Street, U.S.A.” Check out the video below:

Just stunning! We’re so excited to see the projections on Main Street, U.S.A. in person for Disney World’s 50th Anniversary! While we may have previously said the best place to see the nighttime spectacular is in front of Cinderella Castle, around the hub, we now may suggest standing back closer to The Plaza Restaurant and Casey’s Corner on Main Street, U.S.A. to see ALL the magic unfold. Where do you plan on standing to take in all the beauty? Happy planning, Disney fan!