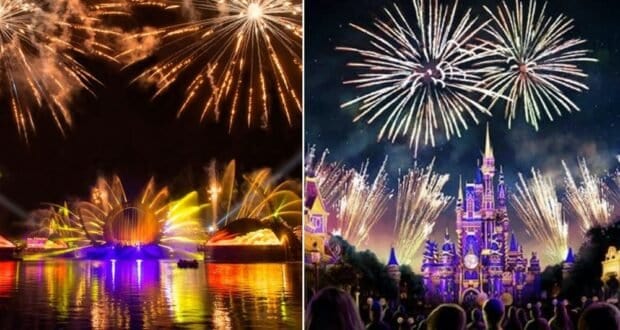 With only days left before Walt Disney World Resort begins their 50th Anniversary Celebration on October 1, 2021, we’re learning we’ll actually have a chance to watch the two new nighttime spectaculars including “Harmonious” at EPCOT and “Disney Enchantment” at Magic Kingdom BEFORE their official debut on October 1, 2021, to Park Guests! Disney has announced the special early 50th surprise noting they are LIVE streaming performances of both ground-breaking firework shows on Disney Parks Blog.

Beginning at 9:00 p.m. ET on Wednesday, September 29, see “Harmonious” at EPCOT, one of the largest nighttime spectaculars ever created for a Disney Park. The show, which is a key milestone in the transformation of the Theme Park, pays tribute to the stories and songs that unite us all featuring new technical magic that includes special pyrotechnics, moving fountains, special lighting, and media.

Just about 24 hours after the “Harmonious” event, Disney will be LIVE streaming the new nighttime spectacular, “Disney Enchantment” along with a special celebratory moment, on Thursday, September 30 at 10:15 p.m. ET from Magic Kingdom Park at Walt Disney World Resort. In “Disney Enchantment,” you’re inspired to believe in magic, with captivating Disney music, enhanced lighting, and immersive projection effects that extend – for the first time – from Cinderella Castle down Main Street, U.S.A. The evening extravaganza features stunning fireworks as well as an emotional original song, entitled “You Are the Magic,” by eight-time GRAMMY-winner and former Walt Disney World Cast Member Philip Lawrence.

Mark that calendar with these dates and times:

Disney has also shared a new, magical behind-the-scenes look at how everything is coming together to bring “Disney Enchantment” to life at Magic Kingdom Park as Cast Members prepare for Disney World’s 50th Anniversary:

Simply visit Disney Parks Blog next week on Wednesday and Thursday for unprecedented LIVE coverage of both nighttime shows as part of “The World’s Most Magical Celebration” at Walt Disney World Resort.