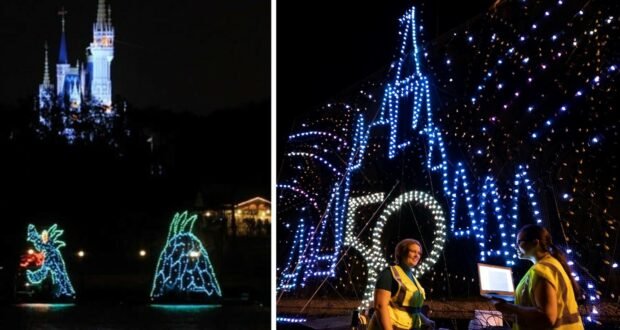 Exciting news is being released by Walt Disney World Resort as we inch closer to the 50th Anniversary celebration kicking off on October 1, 2021. Disney has announced the beloved floating nighttime parade, called the Electrical Water Pageant, will be receiving new scenes for the celebration as it moves through the Seven Seas Lagoon nightly.

Disney Parks took to Twitter to share: “The Electrical Water Pageant joins the fun of “The World’s Most Magical Celebration” with new celebratory scenes featuring a version of the celebration anthem song, “The Magic is Calling,” bookending the full traditional show as it sails nightly. #DisneyWorld50”.

Disney Parks also took to Facebook to share another stunning image, noting “The beloved Electrical Water Pageant joins in the fun of “The World’s Most Magical Celebration” with new celebratory scenes featuring a towering castle, swirling pixie dust, and a version of the celebration anthem song, “The Magic is Calling,” bookending the full traditional show as it sails nightly across Seven Seas Lagoon and Bay Lake. Stay tuned to the Disney Parks Blog for more on the EARidescent updates to the Walt Disney World Resort classic. #DisneyWorld50”

Disney refers to the Electrical Water Pageant as “An Underwater World of Mystery”. “A bright green sea monster leads an enchanting, twinkling musical pageant you can see and hear from locations along the shore. The procession includes a stirring and inspirational medley of patriotic songs while stars and stripes float along the shimmering water. Don’t miss this beloved nighttime delight!”

While we love the nostalgia of the current floats, we are honestly excited to see what new scenes Disney has to offer as they brighten the lagoon with the family-favorite Pageant! We’ll be sure to keep you posted if Disney shares more scenes of what’s to come as the Electrical Water Pageant gets in on the 50th Anniversary celebration kicking off on October 1, 2021.