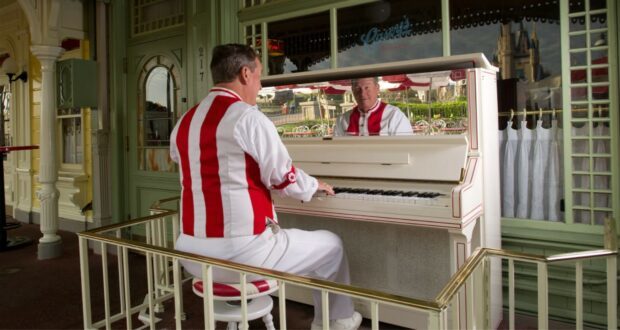 Let the MAGIC begin! We are just days away from Walt Disney World’s 50th Anniversary, “The World’s Most Magical Celebration”. Disney is celebrating 50 years of magic-making with all sorts of excitement kicking off on October 1. Two new nighttime spectaculars including Magic Kingdom’s Disney Enchantment and EPCOT’s Harmonious are making their way to the Parks. Remy’s Ratatouille Adventure will open to the public in EPCOT. Disney KiteTails will debut at Disney’s Animal Kingdom. Plus, all four Disney Park icons including Magic Kingdom’s Cinderella Castle, EPCOT’s Spaceship Earth, Disney’s Hollywood Studios Tower of Terror, and Disney’s Animal Kingdom Tree of Life will glow as Beacons of Magic. And that’s just the beginning! Now, we’re learning another favorite addition is making a come back at Magic Kingdom Park just in time for the launch of the 50th Anniversary.

Casey’s Corner on Main Street, U.S.A. is a go-to for Disney fans looking for that delicious hot dog and french fries. Pre-COVID, you could enjoy your meal while sitting near the side of Casey’s Corner quick-service restaurant and listening to impressive music. The popular Casey’s Corner Pianist would fill the space with fantastic piano music. Well, Casey’s Corner Pianist is making a comeback and is scheduled to return on October 1, 2021!

Currently, Disney lists showtimes for Casey’s Corner Pianist as 11:10 a.m., 11:55 a.m., and 12:45 p.m. beginning October 1! The Walt Disney World website describes this Magic Kingdom favorite as: “Meet a Piano Player Extraordinaire: As you walk down Main Street U.S.A., a fanciful surprise awaits—a live outdoor piano performance. Featuring swell ragtime tunes from a bygone era, these syncopated stylings will have you tapping your toes. When folks start to gather around, don’t be surprised if they start to croon along. Between ditties, this proficient pianist may entertain you with one-liners and zingers. This ivory tickler is a real hoot!”

We’re so looking forward to listening to Casey’s Corner Pianist tickle the ivories at Magic Kingdom once again! Are you visiting Walt Disney World Resort for the 50th Anniversary kick-off on October 1? If so, we will see you there! If not, keep in mind the 50th Anniversary celebration is scheduled to last for a full 18-months. Happy planning your magical Disney vacation!