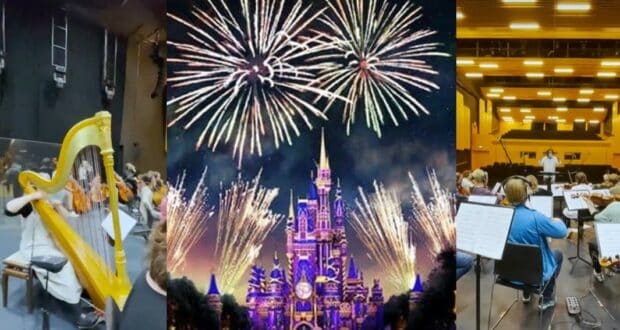 You have been waiting for this moment. After months of planning and saving, you’re finally standing on Main Street, U.S.A. at Magic Kingdom. The lights dim and the Cinderella Castle comes to life with bright, magical projections. Stunning fireworks light up the sky and everything around you seems to glow with shimmering gold Pixie Dust. The nighttime spectacular at Magic Kingdom Park is one of those Disney experiences that is hard to describe as it’s a must-do to experience for yourself. As with most Disney storytelling, you see in Disney films and entertainment, music is really what sets the stage to be enveloped in the story, especially when visiting a Disney Park. As the Theme Park prepares for its 50th Anniversary celebration debuting on October 1, we now have a sneak peek into a recording session for Magic Kingdom’s newest nighttime spectacular, “Disney Enchantment”.

RELATED: One Week Left Until We Say Goodbye to Magic Kingdom’s “Happily Ever After”

While we are sad to see “Happily Ever After” go, we have high hopes the new “Disney Enchantment” will wow Disney fans like never before. The all-new spectacular is said to inspire Disney Guests to believe in magic, with captivating Disney music, enhanced lighting, immersive projection effects that extend for the first time down Main Street, U.S.A., and an emotional original song, entitled “You Are the Magic”, written by Philip Lawrence. Now, Disney is providing a sneak peek into the recording session for the “Disney Enchantment” nighttime spectacular.

Disney Parks took to TikTok to share: “POV: You are in the recording session of the music for the new “Disney Enchantment” #DisneyWorld50 #Disney #DisneyParks #Music #Fireworks” with the video below:

We love seeing the inside of the recording session for Disney Enchantment, as we know these talented musicians are going to bring that dose of magic that hits us with all sorts of emotions! Are you making plans to experience “Disney Enchantment” when it debuts at Magic Kingdom Park on October 1, 2021? Keep in mind, EPCOT will also feature a brand new nighttime spectacular. EPCOT’s Harmonious will also debut on October 1. With two new dazzling fireworks shows and so much to experience for Walt Disney World’s 50th Anniversary, Disney has shared the celebration will last a full 18 months, leaving Guests plenty of time to make those magical vacation plans to experience all the new celebrations to come.