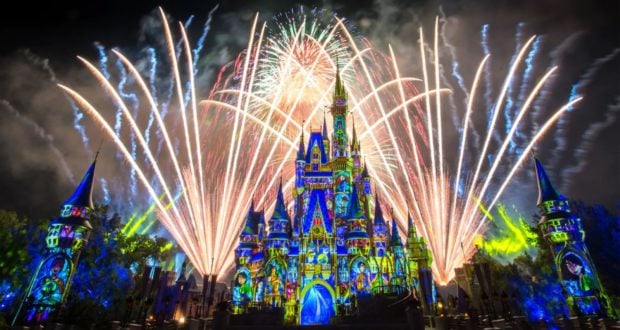 We are officially less than 10 days away from “The World’s Most Magical Celebration” where Walt Disney World Resort will kick off a celebration honoring 50 years of magic-making on October 1, 2021. With the 50th Anniversary fast approaching, new experiences are waiting in the wings to make their debut! Over at Disney’s Animal Kingdom, “Disney KiteTails” will launch as a new daytime show. At EPCOT, Remy’s Ratatouille Adventure attraction will open on October 1, as well as EPCOT’s new nighttime spectacular, “Harmonious“. Most highly anticipated however is Magic Kingdom’s nighttime spectacular transformation as the Theme Park’s “Happily Ever After” moves on to make way for the new “Disney Enchantment“.

Disney has described “Happily Ever After” as a celebration of Disney stories with “Go on a dazzling journey of color, light, and song that captures the heart, humor, and heroism of favorite Disney animated films. Watch in awe as Cinderella Castle becomes part of the story by magically transforming through amazing state-of-the-art projection technology you have to see to believe. This astounding fireworks extravaganza uses lights, lasers, and special effects, plus a soaring score featuring contemporary versions of beloved Disney songs. Discover the magic of movies—and be inspired to find your own happily ever after.”

When Disney announced the incoming of the new “Disney Enchantment” it was made clear that Happily Ever After wasn’t just taking a break for the 50th Anniversary, but it would be gone for good. Walt Disney World website recently changed the title on their webpage from “Happily Ever After” to “Happily Ever After – Last Chance to See the Show” with the note: “Enjoy a last chance to experience this grand finale to your day—before the show’s final performance on September 29, 2021.” The nighttime spectacular is scheduled to take place at 8:15 pm each night leading up to its final performance on September 29.

So, what’s to come in place of “Happily Ever After”? Disney has said Magic Kingdom Park’s new nighttime spectacular called “Disney Enchantment” will enter as “The all-new spectacular inspires everyone to believe in magic, with captivating Disney music, enhanced lighting, immersive projection effects that extend for the first time down Main Street, U.S.A., and an emotional original song, entitled “You Are the Magic”. In “Disney Enchantment,” we join dreamers like Tiana, Miguel, Rapunzel, and brothers Ian & Barley from “Onward,” and we set out on an incredible journey with adventurers such as Moana, Raya, and Judy Hopps. Joe Gardner from Disney and Pixar’s “Soul” takes us into “the zone,” where we discover a whimsical world inspired by the style of legendary Disney artist Mary Blair and filled with beloved characters from classic stories like “Beauty and the Beast” and “Alice in Wonderland” to contemporary tales including “Luca” and “Wreck-It Ralph.” Everything builds to a climactic moment, as Tinker Bell takes flight, spreading shimmering gold pixie dust and empowering us all to believe in ourselves and the magic all around us.” With Disney Enchantment debuting on October 1, keep in mind no fireworks are scheduled for September 30 at Magic Kingdom as one day of quiet between the two shows.