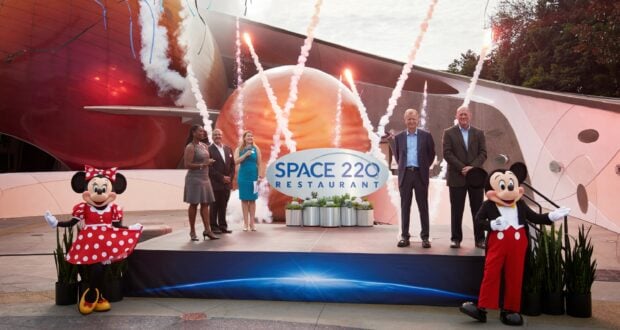 Space 220 Restaurant at EPCOT has been the subject of plenty of rumors over the past year or so. Many people assumed that it was a casualty of Walt Disney World’s 2020 closure. The date for opening kept getting pushed back, and some were sure that it would never open. Fortunately, those people were wrong, and on September 20, 2021, the newest eatery at EPCOT opened to the public. I was part of an invited media group that was hosted to attend the ribbon-cutting and then enjoy a meal inside.

The ribbon-cutting ceremony wasn’t really a ribbon-cutting at all because there was no ribbon. There were welcomes from Disney Ambassador Ali Manion, as well as Kartika Rodriguez, who is the Vice President of EPCOT. There were also representatives from the Patina Restaurant Group, who operate Space 220 Restaurant as well as several other restaurants at Walt Disney World. Mickey and Minnie were also there to welcome everyone, and there were streamers and smoke effects to celebrate the opening.

Space 220 Restaurant is located right next to Mission: SPACE. Head towards the ride and then go to the right. Once inside, you’ll check-in and be given a Space Elevator Boarding Pass. From there, you’ll take the elevator up “220 miles into space”. Of course, it’s all an illusion, but it’s a well-done illusion! You can watch EPCOT and then Florida gets smaller and smaller by looking down or see where you’ll be dining by looking up. The elevator ride is part of the fun. Check out the video of our ride up on our Instagram page here!

Once you’re at the top a Crew Member will reassure everyone that the gravity has been turned on. You’ll walk through the airlock and into a hallway. On one side there is a contraption that has what looks like heads of lettuce and cabbage in it. It’s turning, and another Crew Member claimed that this is where some of the food comes from. After that, there is a wall with circles on it. At first, it seems like it’s just a pattern until you look closer and see that there is a bottle of wine in each circle. It’s an interesting take on a wall of wine bottles.

After that, we entered the restaurant, and it did not disappoint! You won’t see Earth passing by beneath you because the premise is that you’re still attached to Earth, just 220 miles up. You can see Florida at the bottom of the windows. There are some fun effects outside. You’ll see astronauts, satellites, and shuttles. One of the servers explained that the shuttles were from Mission: SPACE. They must have been from the Green side, since Orange goes to Mars. I was told that sometimes the ship from “Guardians of the Galaxy” passes by, but I never saw it.

I dined with two friends who are also media colleagues. Lunch and dinner are both prix fixe. For lunch, the price includes an appetizer and an entree. For dinner, you will also have dessert.

There are plenty of specialty cocktails. Big Bang Tang is supposed to come with astronaut ice cream, but the restaurant didn’t have any available. Atmospritz starts with a glass filled with cotton candy, and then the drink is poured into it. Planetary Punch was another drink that was ordered at my table. There are also mocktails or Zero Proof Sippers. The Lightyear Lemonade was refreshing and tart. Moon Rocks was sweet, but it was delicious. It comes with a pack of Pop Rocks. The idea is to put a small amount of the candy in your mouth and then take a sip of the drink. It’s a cute gimmick, but the drink is unique enough on its own, the Pop Rocks aren’t necessary.

The appetizers were hit or miss with my group. One friend really enjoyed the Space Greens, but the other wasn’t happy with Big Bang Burrata. I ordered the Galaxy Grain Salad. Parts of it were spot on. I thoroughly enjoyed the king oyster mushrooms in the dish, I could have eaten an entire appetizer of them! The cashew hummus was quite good. The rest was okay, but it wasn’t out of this world like I had been hoping.

Then it was time for the entrees. One friend loved the flat iron steak but said that the potatoes on the side were even better. My other friend ordered the Centauri Burger. He said it was okay, but he’s had better burgers at Walt Disney World. I had the Terra-Bolognese, and I would order this again. It’s plant-based, and it’s a different take on Bolognese. It used corn linguine, and the Ragu was made out of tempeh. The portion was huge, and the dish was full of flavor. It’s definitely a step above many of the plant-based options at Walt Disney World. Since we were having lunch we did not have dessert.

Space 220 Restaurant has both full-service dining and a lounge. We estimated that the restaurant itself can probably hold about 200-250 diners at a time. The booths are by the windows and they seat up to four people. There is also a lounge, with both tables and seats at the bar. This area is the furthest from the windows, but there isn’t a spot in the entire restaurant without a fantastic view.

If you dine at Space 220 Restaurant, don’t forget to check out the bathrooms. The theme continues in there, and there is an amusing warning about artificial gravity.

The fun doesn’t end when you’ve finished eating. Remember, you’re 220 miles above the Earth, you need to get back somehow! The elevator ride going back is the opposite of the ride up, but the effects are similar. Instead of everything getting smaller it grows before your eyes. I think I enjoyed it, even more, the second time because I knew what to expect.