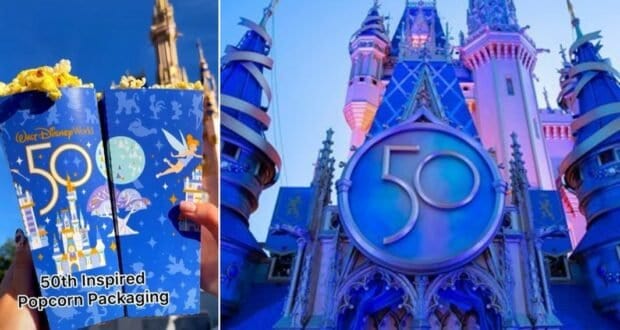 Walt Disney World’s 50th Anniversary celebration launches in just a few days on October 1… and we can barely contain our excitement! Magic Kingdom Park is preparing for its highly anticipated “Disney Enchantment“, EPCOT is debuting both the new nighttime spectacular “Harmonious” and new attraction “Remy’s Ratatouille Adventure“, Disney’s Animal Kingdom is launching “Disney KiteTails“, and Disney’s Hollywood Studios is putting a pause of Star Wars: Rise of Resistance virtual queue. Plus, there’s SO much more! From the Disney Fab 50 character collection arriving at all four Parks to loads of 50th Anniversary decor taking center stage, it’s a fantastic time to be in the Parks. And now… can you smell that freshly popped popcorn?! Disney is rolling out the big 50 on none other than their popcorn packaging!

While all four Theme Parks are getting a touch of the 50th Anniversary decor, Magic Kingdom Park is really the show stopper. There are touches of “The World’s Most Magical Celebration” seemingly everywhere. As you prepare to enter the Disney Park, you’ll spot a fun 50th Anniversary cake with Mickey and Minnie, along with a massive 50th Anniversary sign to greet Guests. Once inside, you’ll spot banners, an updated Citizen Clock on Main Street, U.S.A. and more. If you’re visiting a popcorn cart (and who doesn’t!) you’ll receive a new 50th Anniversary popcorn package!

Disney Parks took to TikTok to share a video of the new touches for the 50th Anniversary at Magic Kingdom Park with the note: “That popcorn packaging though #DisneyWorld50 #Disney #DisneyParks #DisneyWorld #Celebrate #Magic.” Check out the video below:

Too cute! We love that the 50th anniversary touches even made their way to a tasty snack like the Disney popcorn stands! Keep in mind that the popcorn package in the TikTok video is not a refillable popcorn bucket. Of course, you’ll also want to keep an eye out for any specialty souvenir popcorn bucket to arrive at the Theme Park, as Disney has been known to launch differently-themed, highly collectible popcorn buckets regularly. Enjoy your popcorn Disney fan… and all the 50th Anniversary celebrations to go with it!