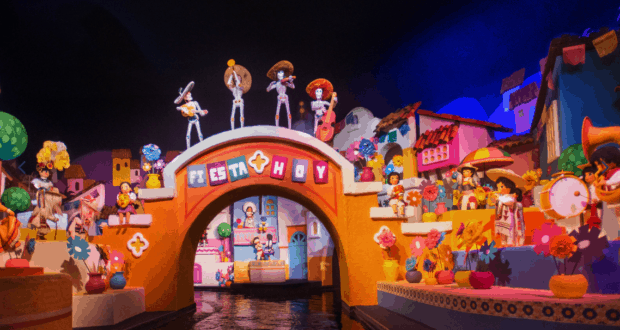 The Music of Disney Attractions

Admit it- you can just hear that picture above, right? There are dozens of attractions to experience throughout Walt Disney World with everything from family-friendly adventures to big thrills. While every attraction is themed to make Guests feel like a part of the experience, it is often the music that stays with Guests long after the attraction is over. From catchy lyrics and tunes to epic scores, the music of the attractions in Walt Disney World is all wonderful and here are some of the best songs to enjoy. Pirates of the Caribbean in the Magic Kingdom’s Adventureland is one of the most beloved attractions throughout the Disney Park and its theme song is just as iconic. “Yo Ho (A Pirate’s Life For Me)” is featured throughout the attraction as an upbeat instrumental version in the queue, mournful version when moving through the moody caves, and then group sing along when Guests reach the scenes where the pirates are pillaging the seaside village. With music written by George Burns and lyrics by Xavier Atencio, this song is an absolute classic.

RELATED: Disney Shares Secrets Aboard Pirates of the Caribbean at Disneyland Resort 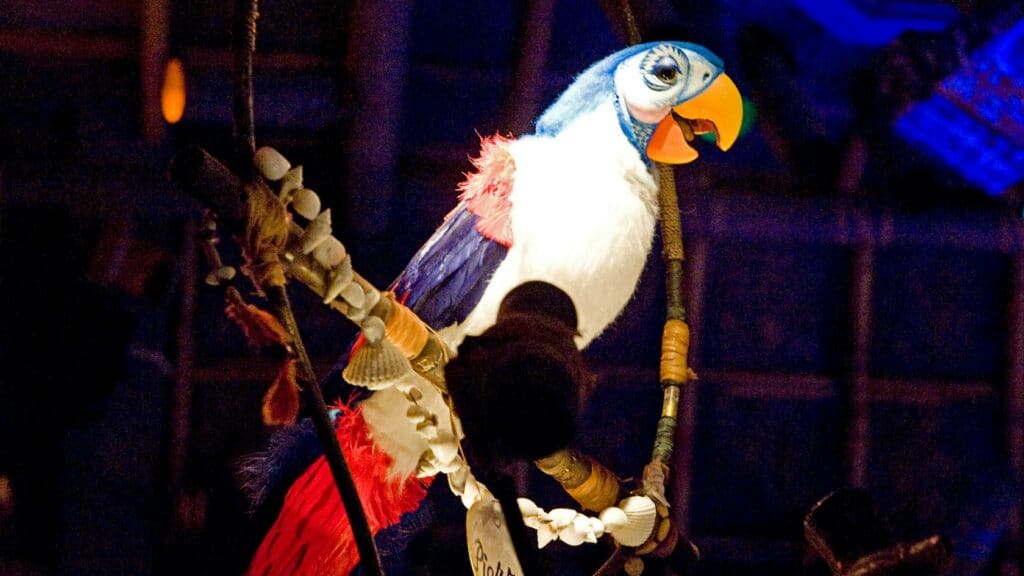 Also found in Adventureland is Walt Disney’s Enchanted Tiki Room where Guests relax in a theater in the round and enjoy a show performed above and all around them by tropical birds, flowers, and tikis. There are several catchy songs throughout each performance, but the most memorable by far is “The Tiki, Tiki, Tiki Room” which has been the theme of the attraction since it opened. One of the most beloved and catchy songs in all of the attractions in Walt Disney World, this melody will be stuck in Guests heads long after they leave the theater and can also be found wound into the background music of Adventureland. 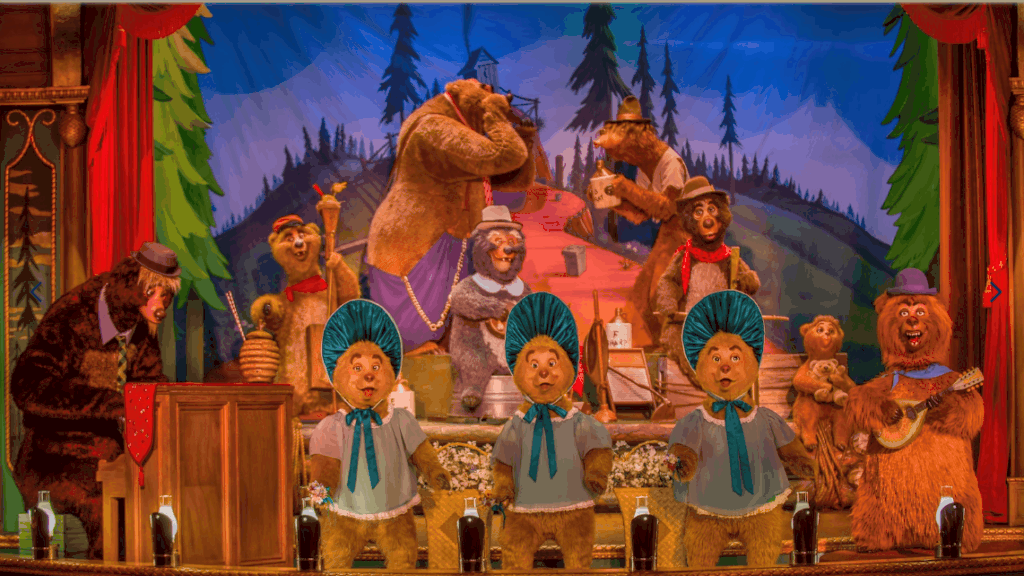 “All the Guys That Turn Me On Turn Me Down”

Frontierland in the Magic Kingdom is home to Country Bear Jamboree, a stage show where a variety of bears perform country hits with humorous twists. While there are plenty of memorable moments including Big Al’s rendition of “Blood on the Saddle,” it’s the Sun Bonnet Trio who perform a hit. Three dainty bears in pastel blue bonnets rise from the stage to perform “All the Guys That Turn Me on Turn Me Down” which features some tongue in cheek lyrics about never having any luck in the dating world. 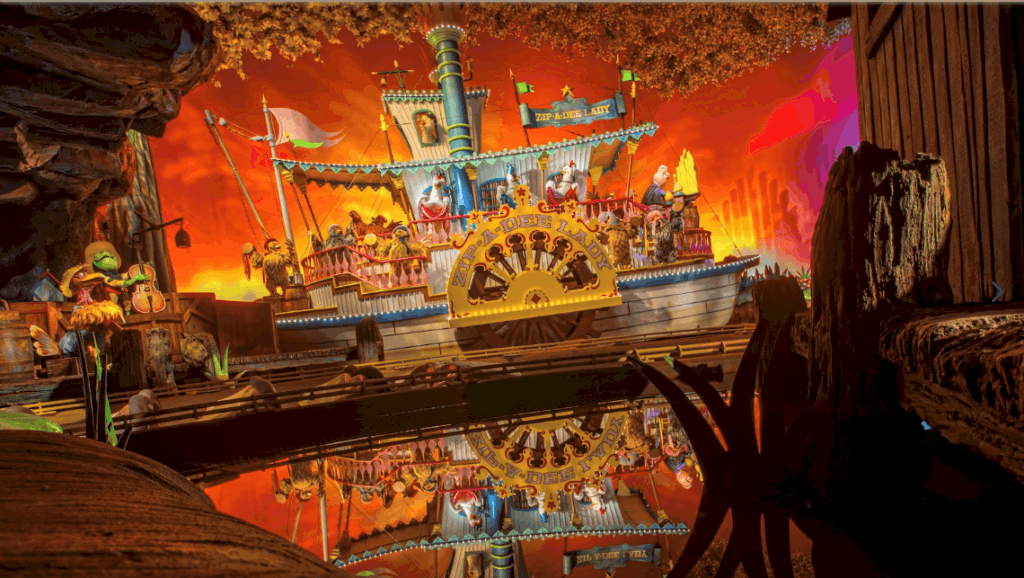 Also found in Frontierland is Splash Mountain which is known by many Guests as being one of the biggest thrills in the Disney Parks. After following Br’er Rabbit on an adventure that ultimately leads him back home to the Briar Patch, the finale scene features the catchy “Zip-A-Dee-Doo-Dah.” With audio animatronic animals belting out the song from a large swaying steamboat, Guests are sure to find themselves singing long to an unforgettable moment. 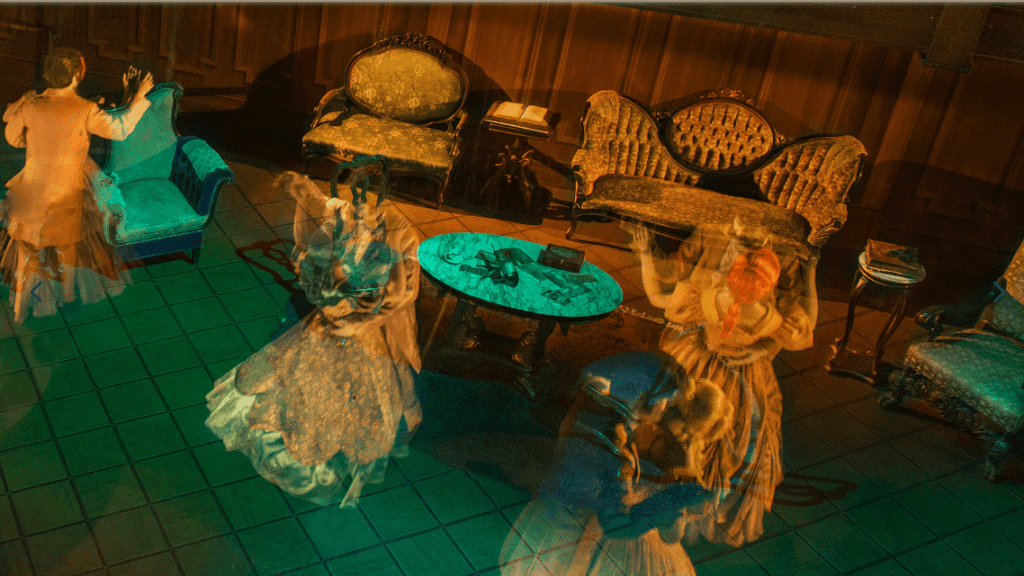 Xavier Atencio’s work can also be heard in Liberty Square in the Magic Kingdom at the Haunted Mansion. “Grim Grinning Ghosts” features lyrics written by Atencio and music by Buddy Baker, and Guests can first hear the melody as a slow mournful welcome in the foyer of the attraction. As Guests move through the Haunted Mansion in their Doom Buggies, various compositions of the song play leading up to the haunting organ version in the ballroom and the sing-along jamboree of ghosts in the graveyard scene. “Grim Grinning Ghosts” is one of the most iconic Disney songs from an attraction and can be heard in various versions of the Haunted Mansion throughout the world. 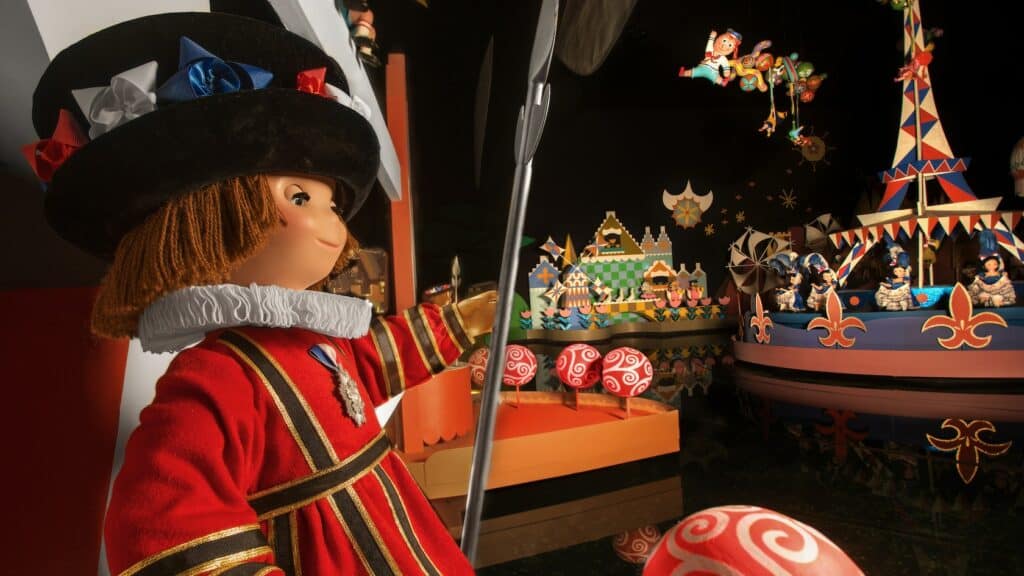 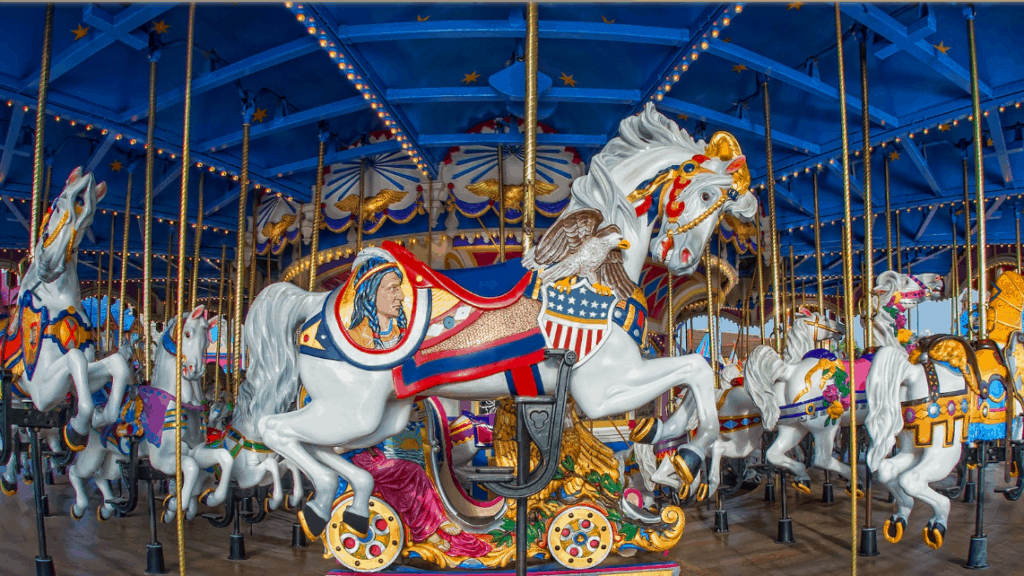 Right in the heart of Fantasyland in the Magic Kingdom is the classic Prince Charming Regal Carrousel. Guests can hop on dozens of beautifully decorated horses and enjoy a leisurely experience that showcases the sights of the area paired with amazing music. Throughout each ride, the attraction plays calliope versions of classic Disney music including “When You Wish Upon A Star,” “Feed the Birds,” and “You Can Fly!” The Sherman Brothers’ work from the 1964 World’s Fair can again be heard in the Magic Kingdom over in Tomorrowland. Walt Disney’s Carousel of Progress was originally funded by General Electric at the event and features the original song “There’s A Great Big Beautiful Tomorrow.” Guests can enjoy listening to various compositions of the song throughout the attraction with styles that match the era showcased in each scene. The song can also be heard as background music throughout Tomorrowland as well, making it an ever-present melody in the park! 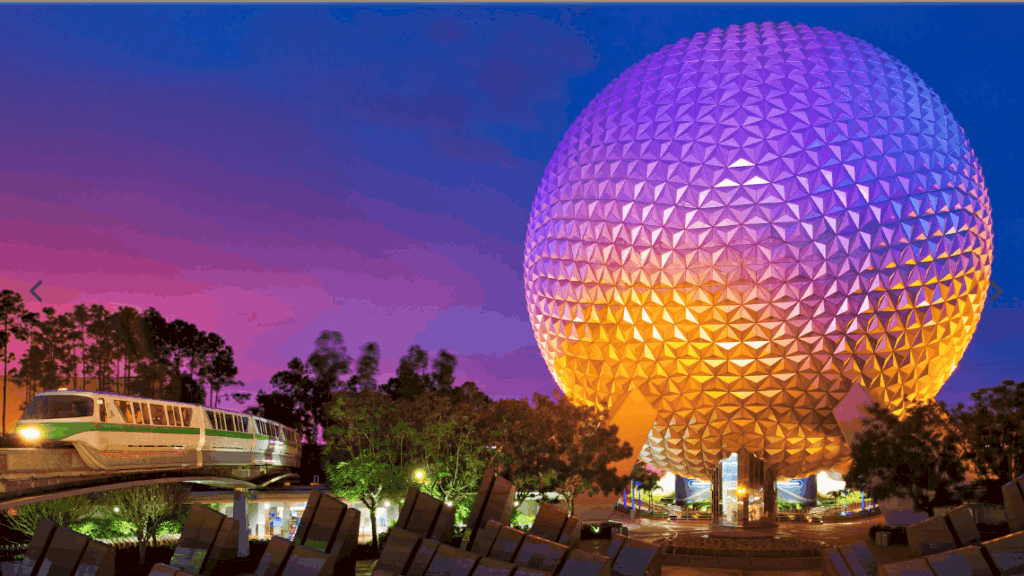 Sometimes a song from an attraction is so beautiful that is does not need any words to make it memorable for Guests. This is certainly true of the score heard while enjoying Spaceship Earth. The dramatic orchestral arrangement can first be heard when entering into the loading area and continues as Guests boar their Time Machines and embark on their journey. The dramatic music continues throughout the attraction with different compositions matching the theme and era of each scene before culminating with the main score again for Guests’ descent back to Earth. 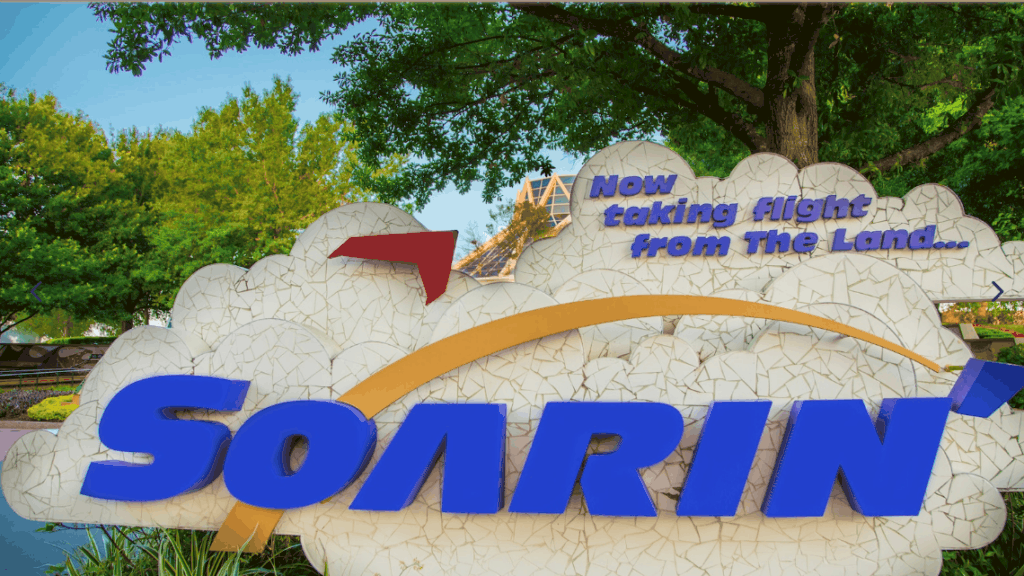 Soarin’ Around the World Score

Epcot is also home to another beautiful score that perfectly accompanies the attraction it is paired with. Soarin’ Around the World can be found in The Land Pavilion in the World Nature neighborhood and features a sweeping score that features drama, whimsy, and building anticipation with subtle changes in each scene culminating in the finale where Guests get to soar over Epcot amongst fireworks. The score from Soarin’ Around the World is one of the most recognizable pieces of music from Walt Disney World, and Guests love to hear it both on the attraction and in Epcot.

RELATED: 8 Awesome Facts About Soarin’ Around the World at Walt Disney World 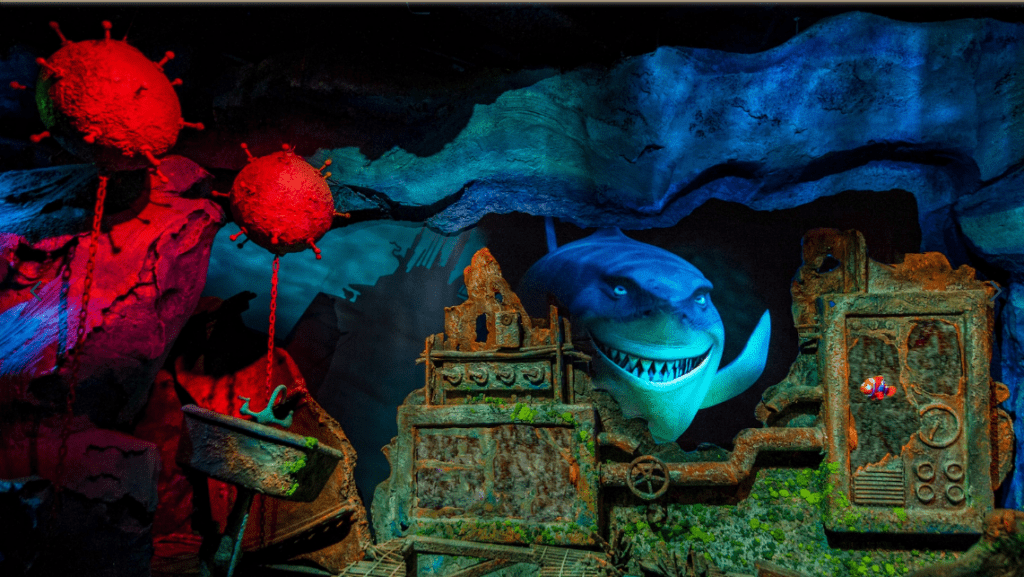 The Seas with Nemo and Friends in Epcot’s World Nature neighborhood brings Guests on a cute and immersive hunt through the oceans to help Marlin and Dory find Nemo who has once again gone missing. Guests can check out familiar characters along the way and end the attraction with the catchy “Big Blue World” which is perfectly paired with views into the aquariums of the pavilion. The song features simple lyrics that capture the beauty of the ocean and just how much of it there is to explore.

RELATED: 8 Totally Cool Things About The Seas with Nemo and Friends at Walt Disney World 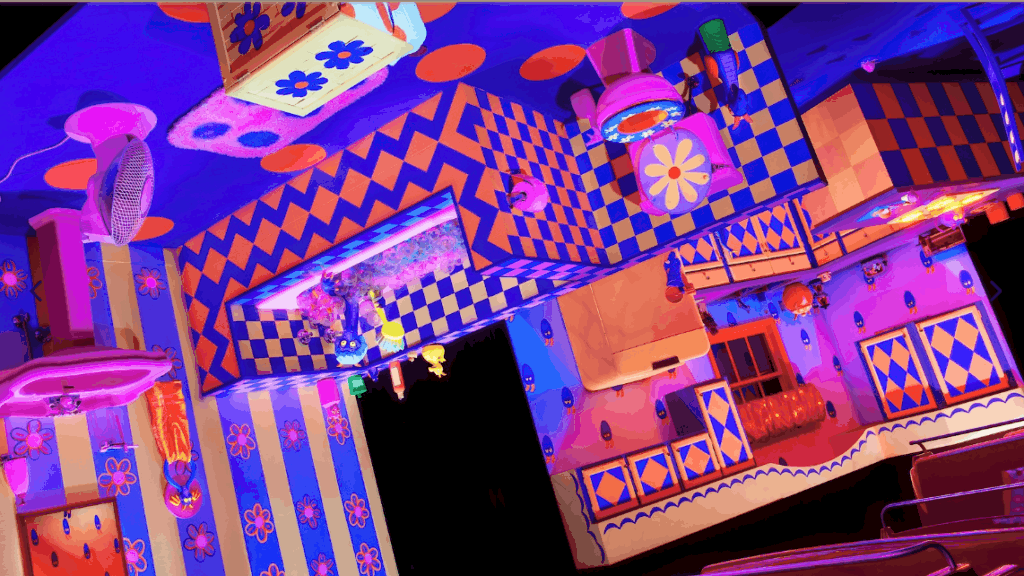 Once again the Sherman Brothers’ music can be found in a beloved song in Epcot’s World Nature neighborhood. “One Little Spark” was an original song written for the original version of Journey into Imagination with Figment and features an upbeat tempo and catchy lyrics that describe just what makes up the favorite purple dragon. Guests can hear the song in various styles played throughout both the queue and attraction leading up to a grand finale where many Figments can be found bursting out into song together with Dr. Nigel Channing.

RELATED: 8 Totally Cool Things About Journey into Imagination with Figment 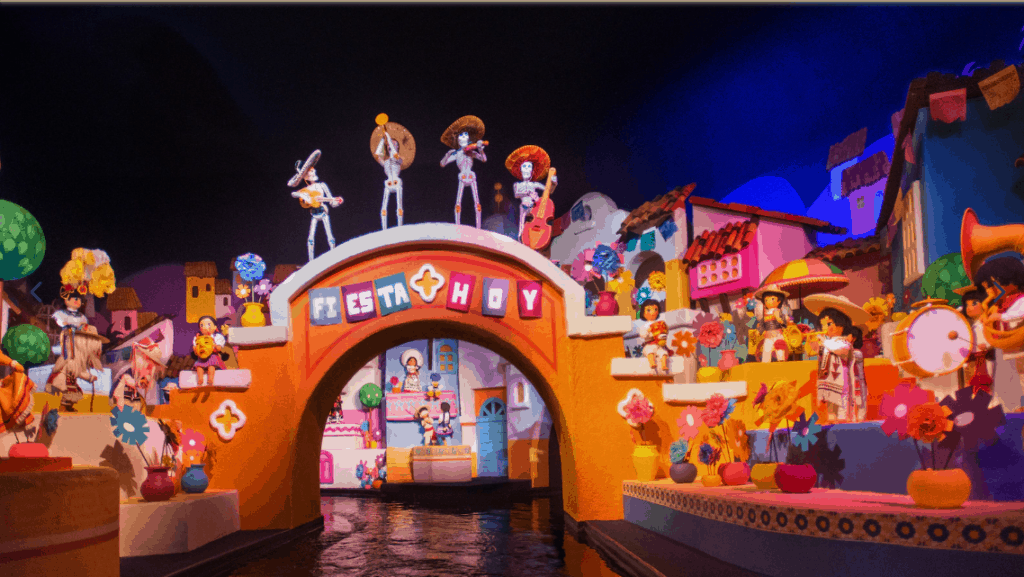 The Mexico Pavilion in Epcot’s World Showcase is home to The Gran Fiesta Tour Starring the Three Caballeros where Guests can travel across Mexico with Jose and Panchito as they search for Donald in time for their concert. Each scene contains lively music, but the final musical number is the most memorable as the Three Caballeros take the stage. “The Three Caballeros” is an original song from the 1977 film of the same name and the three birds can be found in audio animatronic form belting it out on stage for all to hear. 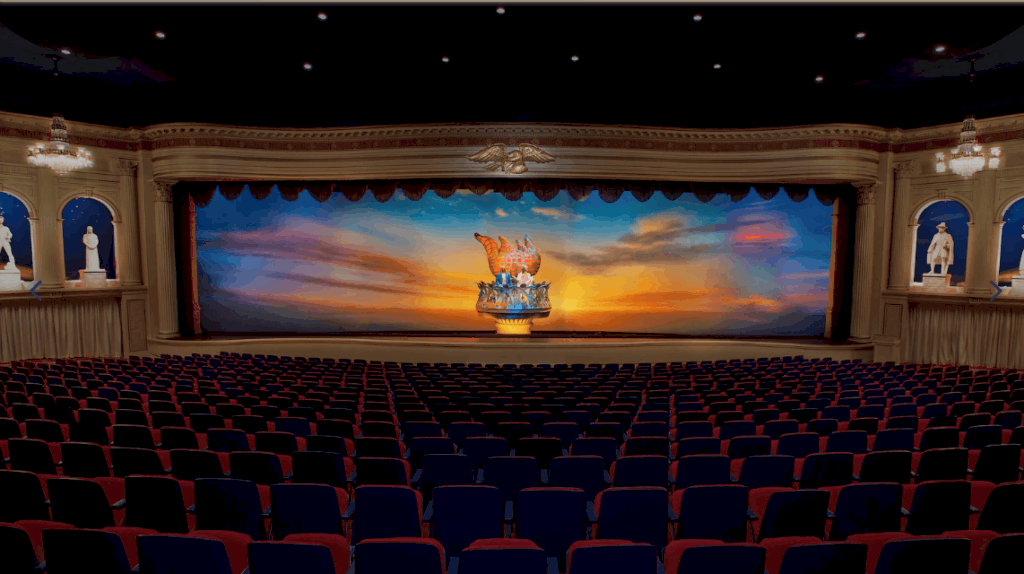 The American Adventure in the America Pavilion in Epcot’s World Showcase presents the story of the American people in a beautiful show that combines audio animatronics, historical footage and photographs, and more. The wonderful story ends with the dramatic and beautiful “Golden Dreams” which sings of the spirit of the people as well as the promise of their future as long as they keep dreaming. It’s a moving song that is sure to be remember by all Guests who enjoy the attraction.

RELATED: 8 Things We Love About The American Adventure at Walt Disney World 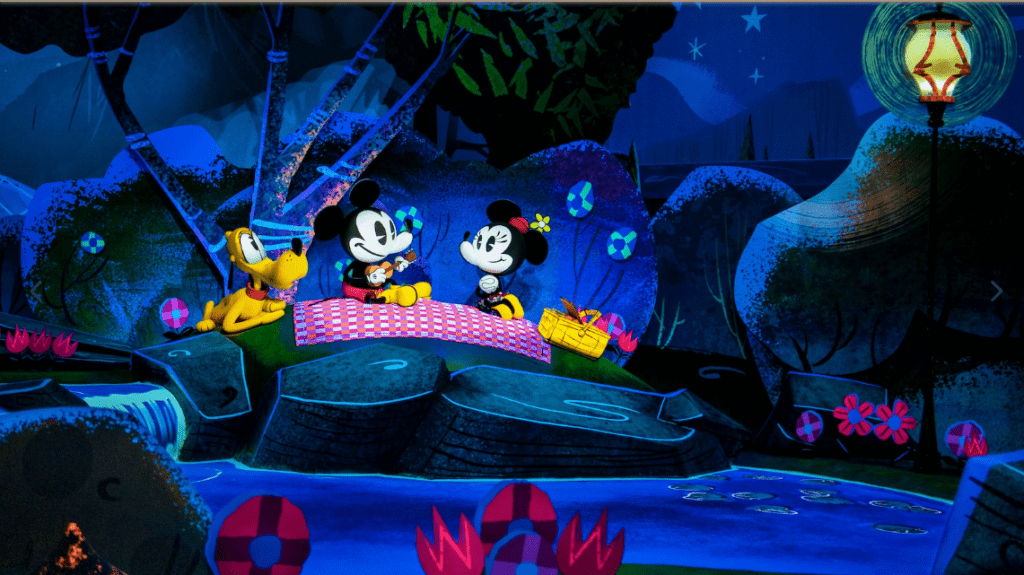 “Nothing Can Stop Us Now”

One of the newest additions to Disney’s Hollywood Studios is Mickey & Minnie’s Runaway Railway situated at the end of Hollywood Boulevard. What is supposed to be a relaxing picnic in the park turns into a chaotic journey that culminates with the original song “Nothing Can Stop Us Now.” First heard during the preshow, the song can be heard as Mickey sings and strums along on his ukulele in a beautiful scene where Guests are immersed in the animated park and fireworks show around them. 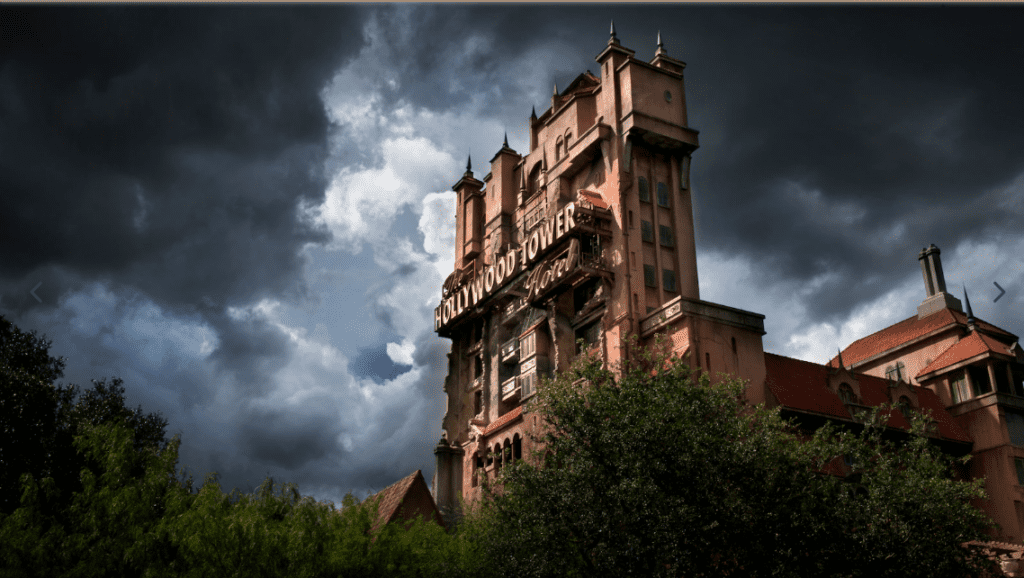 The Twilight Zone Tower of Terror in Disney’s Hollywood Studios is a thrilling attraction where Guests become the stars in their very own episodes of the series and find themselves in another eerie dimension. The classic score from the television series can be heard both in the preshow in the library as well as the attraction itself just before the drop sequence and the memorable combination of the dramatic and foreboding music with the eeriness of the attraction creates an amazing experience Guests won’t forget. The Tree of Life in Disney’s Animal Kingdom is not only the icon of the Disney Park, but also houses It’s Tough to be a Bug!, a 3D show that shares how bugs are beneficial to both the planet and humans. Flik from A Bug’s Life hosts the show and there are plenty of memorable moment including a musical finale featuring an original song of the same title as the attraction. With some 3D gimmicks, humorous characters, and catchy lyrics, “It’s Tough to be a Bug” is the perfect end to the experience that Guests will find themselves humming along to.

RELATED: 9 Disney Songs At WDW That Will Get Stuck In Your Head