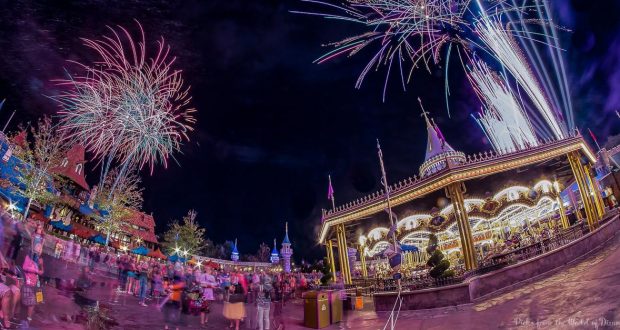 A visit to Magic Kingdom is an experience at the most magical place on earth—a place of wonder and dreams realized, of splendor and pageantry. And nothing displays that wonder, splendor, and pageantry better than the painstaking attention to detail and the thoughtfulness and purpose of the stories behind each attraction in this most magical park. Perhaps more intriguing than the story, design, and color schemes of each attraction is the history behind some of Magic Kingdom’s oldest attractions. Only at Disney World does “old” translate to “Classic Disneyana.” After all, attractions that have stood the test of time—like Prince Charming’s Regal Carrousel—are some of the most intriguing parts of the parks.

Just behind Cinderella Castle across from Mickey’s PhilharMagic stands Prince Charming’s Regal Carrousel, a beautifully ornate merry-go-round that captures the spirit of childhood dreams. And while it doesn’t make the list of most thrilling experiences in the park, it boasts some accolades in its own right: it’s both the oldest attraction at Walt Disney World and a diamond in the treasure chest of theme park history.

5. The carrousel by the number is quite impressive.

The splendid carousel—first called the Liberty Carousel—was originally built for installation at Belle Isle Park in Detroit, Michigan, by the Philadelphia Toboggan Company some 54 years before Walt Disney World opened to the public. The carousel was the 46th of 89 carousels constructed by the company before the Great Depression. With 72 horses—each one hand-carved in maple—four chariots, a sleigh, and a total seating availability for 99 reveling theme park-goers across a platform that measured 60 feet in diameter, the carousel was one of the largest of its kind ever built. 4. Its journey began long before Walt had ever even dreamt of Disney World.

The carousel’s journey continued in 1929 when it was moved nearly 700 miles away to Olympic Park in Irvington, New Jersey—one of the most popular amusement parks on the East Coast at the time. But a string of events that included economic changes, devastating weather—as well as a riot in the park instigated by vandals that resulted in the damage of much of the park’s property—inevitably led to the closure of the beloved amusement park in 1965.

3. It’s a showpiece of Imagineering brilliance.

It wasn’t until 1967 that Disney’s Imagineers acquired the once-majestic carousel. Because of its age and damage, it was in a sad state of disrepair—not at all what Walt would have wanted for his Florida Project. But thanks to the foresight, genius, and creativity of Disney’s Imagineers, the sadly carousel was transformed from unsightly to magnificent.

The refurbishment of the Liberty Carousel included the addition of eighteen new horses. Each of the original 72 horses was stripped down, repaired, and restored before being painted bright white—the color long-associated with heroism. In addition to the white paint, the horses were further adorned with 23-karat gold leaf, silver, and bronze, as well as ornated garlands, feathers, and mighty shields. Remarkably, no two horses are the same.

2. The story of Cinderella is told around the carrousel.

Scenes from the beloved story of Cinderella were also added to the carousel—each one chronicling the story of the maiden’s plight as servant in her own home to ultimately being chosen as the prince’s bride. Imagineers named the attraction Cinderella’s Golden Carrousel, using the French spelling for carousel. The name officially changed to Prince Charming’s Regal Carrousel in 2010.

1. Be sure to take a look the next time you’re in the parks.

Today, Guests at Magic Kingdom can experience the magic and history of this beautiful attraction in all its splendor and wonder. If you frequent the parks, you’ve no doubt seen this magnificent piece of craftsmanship many times, but somehow, when you learn what went into bringing the attraction to Magic Kingdom, you appreciate it with a whole new respect. Choose a noble steed and relive the tale of Cinderella against the backdrop of an old-fashioned calliope as the platform rotates in a counter-clockwise motion. Close your eyes, and revel in the experience aboard a piece of theme park history!