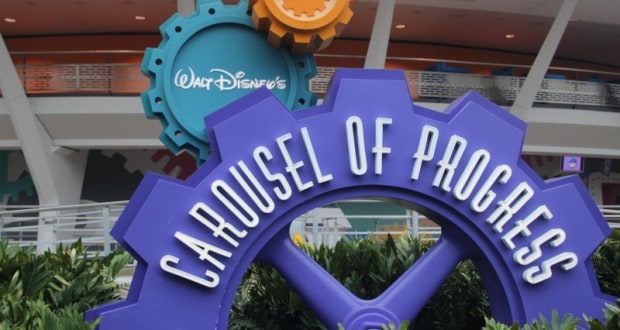 Walt Disney World is home to four amazing theme parks that each feature their own unique areas, attractions, entertainment, shopping, dining, and more. Of the four theme parks, the Magic Kingdom is a favorite of many guests thanks to its perfectly themed lands that are home to experiences that range from classic to thrilling. Tomorrowland in the Magic Kingdom aims to bring guests into the futuristic world of what could be tomorrow and is home to popular attractions including Buzz Lightyear’s Space Ranger Spin and Space Mountain. Also found in Tomorrowland is a classic attraction that’s history dates back to the 1960s. Walt Disney’s Carousel of Progress can be found in an innovative circular building where the audience is seated in a theater that rotates around different scenes on a central stage. The attraction follows one family from the turn of the century to modern day and shares how their lives have been impacted by the constant progress of technology. Walt Disney’s Carousel of Progress is a classic attraction that many guests love to enjoy while visiting the Magic Kingdom and it also features some pretty amazing details and history some guests might not know about. Here are eight totally cool facts about Walt Disney’s Carousel of Progress.

When the 1964 New York World’s Fair culminated in 1965, Walt Disney’s Carousel of Progress was transported to Disneyland where it was installed in Tomorrowland and opened in 1967. The attraction occupied the space that is currently home to the Star Wars Launch Bay and it featured a unique second floor that was home to a post-show and massive model of Walt Disney’s original concept of his Experimental Prototype Community of Tomorrow which can currently be seen from the Tomorrowland Transit Authority PeopleMover in the Magic Kingdom. Walt Disney’s Carousel of Progress remained in Disneyland’s Tomorrowland until 1973 when it was transported to the same land in Walt Disney World.

Many guests are familiar with the classic Sherman Brothers song “There’s A Great Big Beautiful Tomorrow” which can be heard throughout Walt Disney’s Carousel of Progress, but they might not realize that there was another song all together for many years. When the attraction debuted at the 1964 New York World’s Fair, it featured the current song that guests love, but the Sherman Brothers were asked to write a different theme song in 1974 when the attraction made the move from Disneyland to Walt Disney World. “The Best Time of Your Life” was the official song of Walt Disney’s Carousel of Progress from its 1974 Walt Disney World debut until 1994 when the attraction was updated and the original song was restored.

Walt Disney’s Carousel of Progress was sponsored by General Electric from the very beginning and it was the prominent attraction at the company’s pavilion at the 1964 New York World’s Fair. General Electric remained that sponsor of the attraction through its various moves and changes until 1985. While most references to the company were removed, the General Electric name and logo can still be seen in several places including a refrigerator in the 1940s scene.

Also found in the 1940s scene is a tribute to an Imagineer who helped to create the original concept of Disneyland. Guests who look closely through the windows of the scene can spot a sign hanging from a nearby office that reads “Herb Ryman Attorney at Law.” Herb Ryman was an artist at Imagineering and helped Walt Disney design an original concept for Disneyland when the park was being conceptualized and made a reality.

The final scene of Walt Disney’s Carousel of Progress is home to many visual details that guests love to take in as they enjoy a portrayal of the family enjoying modern day technology and progress. Found throughout the scene are several Hidden Mickeys, some of which are easy to find and others that are much harder. While rotating into the scene, guests should look to the wall at the right hand side of the dining room table to spot an abstract painting. Those that look closely will notice that the painting portrays Sorcerer Mickey from Fantasia.

One the left hand side of the final scene, guests can spot the grandfather and daughter seated around the Christmas tree with a decorated mantel in the background. On the mantel are a series of nutcrackers including a Hidden Mickey!

To the far right hand side of the final scene of Walt Disney’s Carousel of Progress are the father and mother seated around a kitchen island and desk. Situated on the kitchen counter is a set of salt and pepper grinders sporting Mickey Ears!

2017-08-02
Caitlin Kane
Previous: Pixar Live At Disney’s Hollywood Studios
Next: 12 Things We Love About Pandora – The World of Avatar