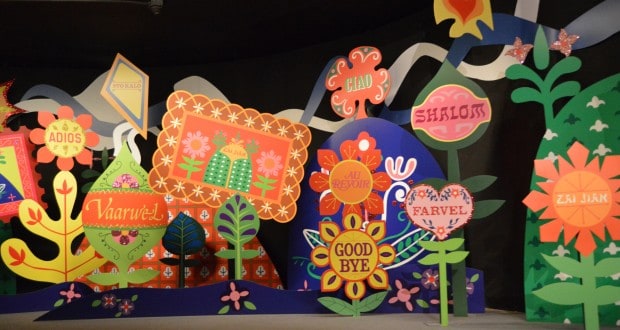 Many guests might not realize that from the moment they step foot onto Walt Disney World property to the moment they leave they are hearing some form of music constantly. Some of the music is obvious and guests recognize it easily and some of it is purposely subtle and made to blend into the background. While riding attractions there are songs that help to narrate the experience guests are having, different areas of the parks have background music that perfectly accompanies the environment, and even Disney resorts have background music playing that matches their time period and setting. With so much music to hear and enjoy on a Disney vacation, it is no wonder that there are certain songs and scores that get stuck in every guest’s head at some point. Here are the nine Disney songs that will definitely get stuck in your head on a Walt Disney World vacation.

9. “There’s A Great Big Beautiful Tomorrow” – This classic song can be heard in the Magic Kingdom on Walt Disney’s Carousel of Progress. Written by the Sherman Brothers, it should be no surprise that this song is wonderful and certain to get stuck in guest’s heads. “There’s A Great Big Beautiful Tomorrow” was originally written for the version of the attraction that was found at the 1964 New York World’s Fair and a clip of the Sherman Brothers performing the song for Walt Disney can be watched before entering into the attraction. Guests are then treated to several different versions of the song as they watch the American family progress through time.

8. “Hooray For Hollywood” – Not surprisingly, this song can be heard in Disney’s Hollywood Studios on The Great Movie Ride. Guests enter into a replica of Grauman’s Chinese Theater and are immediately immersed in opulence and props from classic films. Once on board the ride vehicle, the director calls “action!” and this catchy song kicks in for the first portion of the tour of the movies. Guests will certainly feel as though they are on a real film set and headed into Hollywood with this song stuck in their heads.

7. “Everybody’s Got A Laughing Place” – This catchy and fun song can be heard on Splash Mountain in the Magic Kingdom’s Frontierland. Following along on the adventure of Br’er Rabbit, guests board a log and find themselves drifting through an upbeat scene featuring the song and homes of many of the critters singing nearby. After a drop into a different area, guests find themselves in the actual Laughing Place where frogs and other creatures are playing joyfully and singing along. With a seriously catchy melody, guests will end up with this song stuck in their head all day.

6. “The Tiki Tiki Tiki Room” – Yet another Sherman Brothers song on the list of tunes that will gets stuck in guest’s heads! This classic song can be heard in Walt Disney’s Enchanted Tiki Room in Adventureland in the Magic Kingdom. Performed by a cast of hundreds of birds, tikis, and tropical flowers, guests will definitely find themselves humming along as they leave and continue to enjoy the Magic Kingdom.

5. “Ole Slew Foot” – This banjo heavy country tune can be heard during the finale of the Country Bear Jamboree in Frontierland in the Magic Kingdom. Featuring the entire cast of bears including Henry and The Five Bear Rugs Band, the show stopping number encourages guests to stomp their feet and clap along to the catchy song. After such involvement, guests are definitely going to find themselves with “Ole Slew Foot” stuck in their heads long after leaving Country Bears Jamboree.

4. “One Little Spark” – This ridiculously catchy song can be heard in Epcot on Journey Into Imagination with Figment. Also written by the Sherman Brothers, “One Little Spark” was featured in the original version of the attraction Journey Into Imagination until 1998 and brought back with the current version of the attraction in 2002. Sung now by Figment and Dr. Nigel Channing at the end of the tour of the Imagination Institute, guests love this classic tune and always get it stuck in their heads.

3. “Grim Grinning Ghosts” – This classic song can be heard in the guest favorite Haunted Mansion in the Magic Kingdom’s Liberty Square. Much like “Yo Ho (A Pirate’s Life For Me)”, guests first hear “Grim Grinning Ghosts” as a soft background melody, and then hear several different instrumental versions of it throughout the attraction leading up to the graveyard scene where all of the spirits are out and singing along merrily. With such clever and catchy lyrics, guests will be sure to have this song stuck in their heads long after leaving the mansion.

2. “Yo Ho (A Pirate’s Life For Me)” – One of the most popular and beloved attractions in the Magic Kingdom is Pirates of the Caribbean where guests get to sail alongside pirates as they ransack a coastal town. Along the way, guests first hear soft instrumental versions of this classic song and finally hear the full version sung by dozens of pirates. After a trip to the Caribbean with the swashbucklers, guests will find themselves with the song securely stuck in their heads.

1. “It’s A Small World (After All)” – This is the obvious choice when compiling a list of Disney songs that will get stuck in a guest’s head. It’s A Small World in the Magic Kingdom takes guests on a cruise around the world where they get to see dolls from dozens of different countries sing along to the classic attraction song. “It’s A Small World (After All)” was written by the Sherman Brothers who also penned countless other Disney tunes. After riding the attraction and listening to the catchy song sung in several different languages, guests will definitely find themselves humming or singing the tune at various points throughout their vacation.

2015-07-13
Caitlin Kane
Previous: 5 Things You Will Love About Yachtsman Steakhouse
Next: 10 Things At Walt Disney World That Choke Me Up Every Time