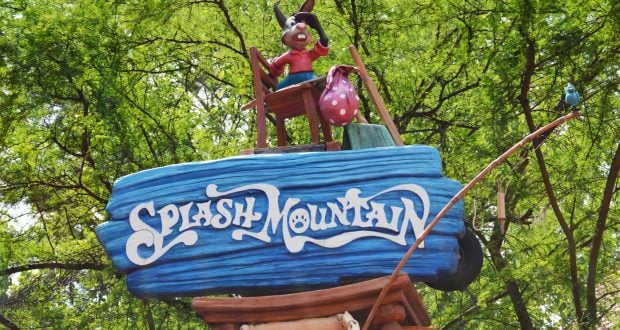 Maybe it is a sense of nostalgia combined with imagination, or just the history geek in me, but my favorite Magic Kingdom lands for overall atmosphere tend to be those that relate to American History like Main Street USA, Liberty Square, and Frontierland.  I love the details of Frontierland with the raised sidewalks to stay out of the mud (and other street mess), the architecture, and the music.  Here are 8 of my favorite things found in Frontierland:

In Frontierland you can find a few more “unusual” characters than in any other place, so if you are on the hunt for rare characters make a stop in Frontierland.  The Country Bears have a meet and greet here where you can meet a couple of bears from the group—Big Al, Liverlips McGrowl, Shaker and Wendell all take turns meeting guests at some point.  And I mean who would pass up an opportunity to meet a character named Liverlips??  In Frontierland you will also periodically find the Frontierland Hoedown (check your times guide available at the front of the park or ask a Cast Member for details).  During the Frontierland Hoedown you may see Clarabelle Cow and Horace Horsecollar. I love Frontierland for Parade viewing for a lot of reasons.  And I think it works well for the daily afternoon parade along with the night time parades during the special parties like Mickey’s Not So Scary and Mickey’s Very Merry.  The first advantage is that the parades step off in Frontierland right beside Splash Mountain, so if you are in Frontierland you get to see the parade earlier, and therefore finish earlier and get back to your park touring.  Frontierland tends to be a little less crowded than Main Street USA, so you may be more likely to find a great viewing spot on the front row, and be able to line up a little bit closer to start time.  There are also some great spots where you can sit on raised walls to view the parade, and those raised walkways also help you be able to see a little better if you are not on the front row.

I love Tow Sawyer Island, it is like a little escape from what can sometimes be a chaotic Magic Kingdom.  Hop on the raft over by Big Thunder Mountain Railroad and you are transported to a totally different world of Mark Twain’s Tom Sawyer.  It is almost strange looking back at Frontierland once you are on the island, it feels so removed.  There are two things I love about Tow Sawyer Island.  One, it is a fantastic spot for kids to run off some energy.  It is rarely crowded and there are fun floating bridges, caves to explore, a fort and more fun.  But, it is also a great place to relax.  The chairs and tables over by Aunt Polly’s are my favorite snack spot and a perfect place to take a few minutes to regroup.  It isn’t a bad place to watch the parade either. I think the Imagineers did a great job of capturing a (clean) town on the Frontier in the 19th century.  The architecture is one of the really cool things about the land—and totally appeals to my inner history geek.  If you begin your passage through Frontierland from Liberty Square you are in the earliest section of the land time-wise, and the closest to the East Coast.  You are starting out in a St. Louis area, the gateway to the West.  This is around the Diamond Horseshoe area and across from the Liberty Belle Steamboat.  Then as you progress through Frontierland the architectural styles change as you move further west and into the Frontier.  Big Thunder Mountain represents the end in California and the Gold Rush.  As you pass the buildings on your left notice they dates like the 1867 Town Hall or the 1878 Saloon (Pecos Bill’s)—they get later as you get closer to Splash Mountain signifying the passage of time.  The style of architecture also changes from the very rudimentary early frontier buildings past Diamond Horseshoe to more elaborate designs, all the way down to Pecos Bill’s where once you turn the corner headed toward Adventureland it features the Spanish architectural influences of the Southwest and California.  Frontierland is also the only land not directly accessible from the main hub, which adds to the feeling of being remote and having to travel to get there.  All of the details the Imagineers included are really impressive.

We love the Shootin’ Arcade located just past the Libery Square entrance to Frontierland. One of the few things that costs “extra” in the park, the Shootin’ Arcade is a fun break from attractions and it so elaborately themed. Take aim at the tombstones, but take time to read the puns too.   It just kind of feels like old fashioned fun.  This is a nice place to stop if you have some time between attractions. True Confession:  It took me a lot of years to be brave enough to try Splash Mountain.  But, boy was I missing some fun!  This is now one of my favorite attractions.  I just love the story of Brer Rabbit trying to escape Brer Bear and Brer Fox and all of the elaborate Audio Animatronic scenes inside telling the story.  And the big drop isn’t even all that bad.  On a warm day a little splash is nice, but you can get drenched on this ride depending on where you sit and the timing of the ride (hint those who get in first at the loading station may get “less” wet).  But, if you don’t want to walk around wet for a while I recommend wearing a poncho or rain jacket.  I like to hit this ride first thing in the morning or grab a FastPass to avoid longer waits.

Pecos Bill’s Tall Tale Inn and Café is probably my current favorite quick service restaurant in the Magic Kingdom—and a lot of other people’s as well!  It can get pretty crowded during popular dining times, and sometimes the ample indoor and outdoor seating can be hard to get.  While the menu here does sometimes change, they offer a great selection of Tex-Mex favorites like Fajitas, Rice Bowls, Southwest Salad, Nachos, and Tacos.  If you have someone in your party who doesn’t care for Mexican they also have a burger and Mac & Cheese is on the kids menu.  The best thing here?  The fixins bar!! Pic de Gallo, Salas, Sour Cream, Cheese, Lettuce, Tomatoes . . . all available to top your entrée or to use with the Tortilla Chips served with some of the entrees.

This is a classic, and a sentimental favorite for my family.  I just love the Wildest Ride in the Wilderness.  Big Thunder Mountain is the quintessential themed roller coaster set in the California Gold Rush.  As you zoom around the mountain you see mining equipment, a flooded mine town, animals, and even dinosaur bones.  The thrills are tame enough for most people, but still super fun.  Even the queue with all of its details and interactive elements (look down into the mine, and read the signs as you wait) is entertaining.  I like to ride Big Thunder first thing in the morning, but also at night because it is even better in the dark!  If you happen to catch it while the Happily Ever After Fireworks are showing it is a special surprise.  Big Thunder Mountain Railroad is my favorite thing about Frontierland. What are your Frontierland Favorites?