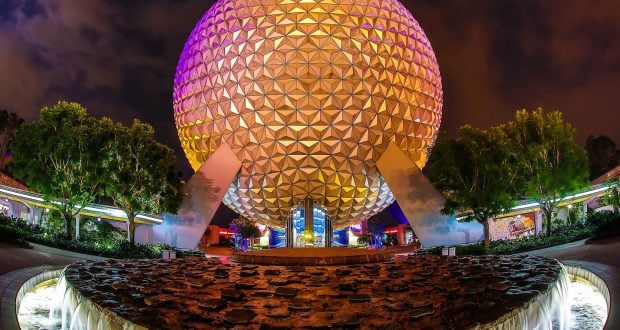 It’s the first thing you see when you visit EPCOT—the iconic symbol at the gateway to the park. Millions of people stand in front of it each year and smile for the PhotoPass photographer so they have a tangible reminder of their visit to EPCOT and a picture of its enormity.

Spaceship Earth has stood as EPCOT’s symbol since it was first completed and open to parkgoers  in October of 1982. The silvery triangled geodesic sphere stands just seven feet shorter than its Magic Kingdom counterpart, Cinderella Castle. Many visitors to the parks refer to Spaceship Earth as the “giant golf ball.” But true Disney fans know there’s more to that sphere than meets the eye—and more to it than will ever meet the eye.

That’s because the very design, construction and building of Spaceship Earth was nothing short of an engineering marvel and an architectural feat. Whether you’ve visited EPCOT once or many times, the following eight amazing facts about the structure of Spaceship Earth are sure to delight, amaze, intrigue and impress you.

8. Its sheer size is pretty staggering.

Spaceship Earth sits fifteen feet above the ground, and the highest point of the sphere measures 182 feet tall. It is 160 feet in diameter. It’s so large that over 1700 tons of steel were used in its construction. Over 11,000 isosceles triangles punctuate the outer structure, and it takes up a whopping 2.2 million cubic feet of space. It holds a record too, as Spaceship Earth is the largest free-standing sphere in the world.

7. It took a while to complete construction.

The process from beginning of construction to completion of the giant sphere was 26 months. The construction of the entire EPCOT park was estimated to require 6 years for completion. It was completed in three, and at an amazing $1 billion, even though the budget was $600 million.

6. Its design was partly the brainchild of a famous author.

Science fiction writer Ray Bradbury played a role in the creation of Spaceship Earth. Bradbury is known for his many works, including The Martian Chronicles, Dandelion Wine and perhaps what is known as his masterpiece, Fahrenheit 451. Bradbury had met Walt Disney while walking down the street in Beverly Hills, California, and the two had lunch the next week. They became friends and had a true admiration for each other’s work. Because of this, the Walt Disney Company hired Bradbury to contribute to the development of EPCOT. He helped design the geodesic sphere of Spaceship Earth that we know today as EPCOT’s icon. He also did work on the script for the attraction inside the sphere.

5. Its six legs are deceiving.

To the untrained or distracted eye, the structure of Spaceship Earth appears to be held up by its six legs. However, it would simply be impossible for the legs to hold up the load of the giant sphere. Because of this, the six legs were driven deep into pile groups nearly 160 feet under the earth’s surface. Hexagonal trusses were then built at the top of the six legs to create a “table” or platform. It’s these trusses that support the load of the structure of Spaceship Earth. Otherwise the six legs would have buckled under such force. The upper 75% of the sphere is supported by the platform of trusses, and the lower 25% of the structure is simply suspended from the platform. Its construction was quite the engineering feat to say the least.

Another marvel of the design of Spaceship Earth has to do with the surface’s cladding. It was designed in such a way that no matter how much it rains in Central Florida, no Guest will ever get wet from walking under Spaceship Earth. If you walk out the front door of your house while it’s raining, you will first get wet from the rainwater dripping off the awning of your house. Disney Imagineers wanted to ensure that rainwater would not drip off any part of the geodesic sphere of Spaceship Earth. For this reason, they designed the surface with one-inch gaps in the facets. As rainwater falls onto the surface of the structure, it is collected into a gutter system. The rainwater is then routed to runoff into the World Showcase Lagoon at EPCOT. What a great idea—keep Guests dry and re-route rainwater into the lagoon! Win, win!

Spaceship Earth was a first for Disney and one of the first for construction in the United States. It was the first Walt Disney World attraction for which the external structure or housing was built first, and then the ride was built. Until then, Disney had always built the ride first before constructing the building that would house the ride.

This amazing sphere was also one of the first uses of composite metal panels on a project, and it was one of the first applications of “rainscreen” principles (as described above) in the United States.

2. It’s not the biggest thing at EPCOT.

Toward the end of 1999, in celebration of the new Millennium, Disney erected Mickey’s gloved hand, a wand and the number “2000” atop Spaceship Earth. The three parts weighed nearly 50 tons. Each number in the “2000” was 36 feet tall. The “2000” stayed up well into the new year, and after that, Disney removed it and added the word “Epcot” to the signage. The hand, wand and word were removed in 2007.

Spaceship Earth is a fascinating sight to see. Many designers, architects, engineers, contractors, dreams and visions went into the construction of the largest free-standing sphere on Earth. So the next time you hear someone refer to it as simply the “giant golf ball,” let them know how truly spectacular the structure is!