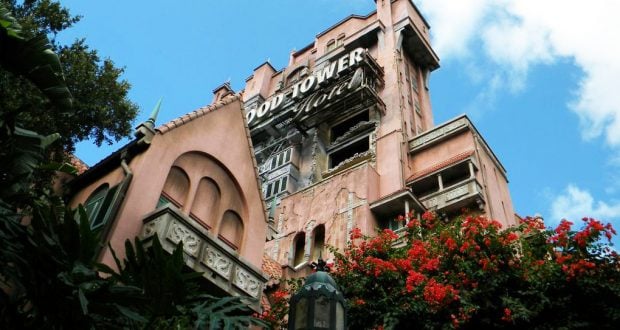 10 Facts and Secrets About The Twilight Zone Tower of Terror

The Twilight Zone Tower of Terror opened at Hollywood Studios on July 22, 1994. It is the second tallest attraction at Walt Disney World, coming in second to Expedition Everest, which is 199.5 feet. The top speed of the elevator is 39 miles per hour, which it can reach in 1.5 seconds. The motors in each ride vehicle weigh 132,000 pounds each and can move 10 tons at 15 times the speed of any regular elevator.

While it isn’t located in Morocco, the backside of the Tower of Terror is visible to guests in Epcot who are wandering around the world showcase. With both Hollywood Studios and Epcot being so close, it sits in the same line of sight as the Morocco Pavilion. To make sure it didn’t detract from the architecture, Disney Imagineers made sure that the back of the Hollywood Tower Hotel matched the look of the buildings. The pale pink color of the building was chosen as well as architectural accents to blend into the pavilion from all views

8. Not Actually a Free Fall

Repeat guests to the Hollywood Tower Hotel can attest that each trip to the Twilight Zone is different. Just before the ride begins, the computer selects a random drop pattern so that once the elevator moves into position, the guests will experience a unique combination of drops and lifts. The only thing that guests can reliably count on is the fact that there will always be one false drop and one full drop through the entire height of the tower, reaching the top speed of 39 mph.

Pay close attention to the little girl in the pre-show video and you’ll spot a Hidden Mickey. This Hidden Mickey is a 1930’s era Mickey Mouse doll. There are other Hidden Mickeys throughout the attraction, such as some sheet music in one of the libraries that is entitled “No Mickey Mouse? What Kind of Party is This?” And of course there are the classic Hidden Mickeys, such as in the broiler room where some of the grating is three circles that together create that familiar shape!

Although the number 13 may be considered unlucky, that isn’t the case when visiting the standby line at the Tower of Terror. If you see that the wait time is listed at 13 minutes for the standby line, it’s actually a code for no wait time at all!

Rod Sterling from the original TV series The Twilight Zone hosts the pre-show video in the library, but have you ever wondered how Disney created that video that is so very specific to the story of the attraction? The clip was taken from an episode of The Twilight Zone called “The Good Life”. Imagineers did some careful and well-timed editing and paired it up with a voice-over by a spot on impersonator, so the voice you hear in the library isn’t Rod Sterling’s at all! Once again, Disney’s attention to detail is impeccable!

We mentioned how heavy and strong the motors are, but we didn’t mention how the elevator shafts are actually part of the motors. The two motors in the attraction have so much torque that it gave the Imagineers the ability to control and move the elevators in opposite directions so quickly and smoothly that at times guests don’t know if they’re moving up or down at times. The motors are so big that they had to be lifted into position with a crane, and then the building was completed around them.

Even though many of the visual elements in the ride appear to be high tech, some rely on old magician’s tricks to accomplish the look. On your trip up to the corridor scene, the ghostly images of the characters appear to be semi-transparent as you see the hallway behind them. In reality, projections are reflected off of a mirror and land on a pane of glass, which gives the illusion that they are right in front of you. It’s a similar effect to the ballroom scene in the Haunted Mansion at the Magic Kingdom.

The attraction is full of winks and nods to episodes from The Twilight Zone, from the lobby to the library, the broiler room and all the way to the exit. There’s a ventriloquist’s dummy near the exit that is from an episode Caesar and Me, there are broken glasses, and even a slot machine that reference episodes. It may be impossible to know what props are placed there as a tribute to certain episodes from the old TV show, but it’s amazing to think about the attention to detail that the Imagineers had when constructing this wonderfully eerie attraction.