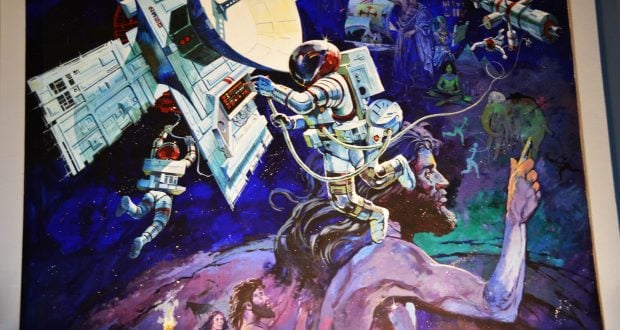 Every guest immediately recognizes photos of Epcot in Walt Disney World thanks to an iconic structure found in the Future World section of the park. Spaceship Earth is housed inside a massive geodesic dome and features an exterior composed of futuristic looking silver triangles. Spaceship Earth is a beloved attraction that brings guests on a journey from the beginning of time to modern day to celebrate the evolution of communication thanks to the innovation and creation of new technologies. While moving through the attraction, guests can enjoy scenes depicting important moments in history including man landing on the moon, the burning of Rome, the Renaissance, ancient Egypt, and much more. While many guests love to enjoy a ride on Spaceship Earth on every visit to Epcot, they might not realize that the attraction is filled with incredible facts and details that help to bring the experience to life. Some of these details include Hidden Mickeys and tributes to Imagineers and others capture the incredible architecture and history that went into creating the structure. These details and facts help to make Spaceship Earth a totally amazing experience, and no visit to Epcot is complete without enjoying the attraction. Here are eight totally cool things about Spaceship Earth for guests to discover on their next Walt Disney World vacation!

Part of what makes Spaceship Earth so memorable to guests is its impressive name. Many guests might assume that the term was coined by Disney Imagineers, but it was actually created by Buckminster Fuller. Fuller created the term to describe how Earth is considered to be a spaceship relying on the power and energy of the sun. He argued that the Earth needed routine work and maintenance to keep it operating fully and this idea is expressed through the maintenance and advanced of communication showcased throughout the attraction.

Spaceship Earth itself is a geodesic sphere that rests on four supports that help maintain the illusion that the structure is floating. The exterior of Spaceship Earth particularly looks futuristic as it is covered in thousands of geometric silver triangles. The number of these triangles is impressive to any guest that observes them, but many might not realize that there are over eleven thousands of them that can be seen from every angle!

In addition to looking impressive and adding amazing detail to Spaceship Earth, the silver triangles also serve a completely functional purpose designed to make the park more enjoyable to guests during inclement weather. Central Florida is famous for its intense thunderstorms and rain, especially during the warmer months, and it is not out of the ordinary for one of those storms to create several inches of rain. When inclement weather like this occurs, much of the rainwater that falls onto Spaceship Earth is absorbed by a draining system found between each of the triangles! The rainwater is then funneled to World Showcase Lagoon, preventing it from running off the edges of the structure and soaking guests seeking relief underneath.

Spaceship Earth features many different scenes that represent specific moments in the history of communication. In order to convey these scenes with relation to human beings, there are dozens of audio-animatronics found throughout the experience. Instead of designing so many audio-animatronics from scratch, Imagineers borrowed from ones already in use at the Hall of Presidents in the Magic Kingdom. Guests who enjoy a ride on Spaceship Earth should look for James Buchanan as Gutenberg, Franklin Pierce as a scholar, Teddy Roosevelt as a Roman, John Adams as a monk, and William Taft as an Egyptian.

When entering into the scene depicting the Renaissance, guests pass by a duo of monks on the left hand side of their attraction vehicle. While the first monk is hard at work translating and copying manuscripts, the second monk can be found sound asleep at his desk! Guests who look closely at the paper in front of the sleeping monk can spot a classic Hidden Mickey formed by ink stains.

Further into the Renaissance scene guests can look again on their left hand sides to spot a cluster of artists hard at work creating beautiful works of art. Near the painter is a table covered with various painting supplies of the era. Guests who look closely can spot a classic Hidden Mickey formed by three paint rings on the top of the table.

As guests near the end of the experience on Spaceship Earth, they pass through a lengthy scene that depicts much of the advancements made in communication during the most recent century. On the left hand side of the ride vehicles, guests can spot a recording studio where an artist is hard at work recording a live segment of entertainment on a very interesting channel. The microphone in front of the actor reads WDI which is a reference to Walt Disney Imagineering.

After the grand reveal of Spaceship Earth, guests begin their descent back to Epcot and can answer a series of questions on the touch screen in front of them. Their chosen answers create a cartoon vignette that showcases what their future could be like based on their preferences. After disembarking Spaceship Earth, guests emerge in Project Tomorrow where a large screen and several kiosks can be found in the middle of the room. Guests who stop at one of the kiosks and retrieve their snapshot of the future can have the option of emailing the cartoon photo to their family and friends making it a great free keepsake to enjoy!