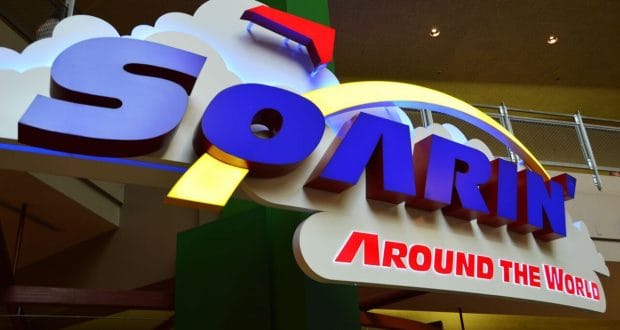 Soarin’ Around the World is an amazing ride that leaves guests feeling as though they’re hang gliding over landmarks all around the globe. Because this ride is so incredible, it’s incredibly popular—and because it’s so popular, many people want to know more about it. Therefore, we’re going to use this article to share 8 fun facts about Soarin’ that you may not already know.

If you’ve been to Disney World in recent years, chances are you’ve taken a spin on this attraction, but did you know you could do the same thing at California Adventure park in Anaheim? The original version of this attraction actually opened in California a full four years before Disney World got their Soarin’ ride. Not only that, but Disneyland in Shanghai also has a Soarin’ ride and even had the honor of debuting the most recent version of the film.

If three Soarin’ rides aren’t enough for you, don’t worry! In July 2019 a fourth iteration of this ride opened in Tokyo DisneySea. It has the same film as the current three. This addition makes four Soarin’s in total!

3. …But They Have Different Endings

The original version of the ride, Soarin’ Over California, was designed specifically for the California park. Therefore, the ending to this film had guests landing in Disneyland with a grand fireworks finale. In recent years, the ride film has been updated and each of the four attractions boasts a different ending to match their current location.

4. Hidden Mickeys are Waiting to be Discovered

Those fireworks we just mentioned? Be sure to watch them carefully for a hidden Mickey. In fact, our favorite mouse can be found during the fireworks scene in all three endings. Additionally, keep an eye out during the hot air balloon scene in Monument Valley. You might just find a super secret Mickey head there as well.

5. Planning was the Name of the Game

In both the original film and the current one, a lot of behind-the-scenes work and staging went on before and during the filming process. For instance, Disney had to get special permission to film many of the movie’s scenes, and some of those permissions took an entire year to acquire. Additionally, they had to stage many of the scenes just perfectly, meaning a good number of people were working for a very long time to make the film.

Although the ride didn’t actually open in California until 2001, Imagineers were brainstorming the concept of Soarin’—then referred to as “Ultraflight”—as early as 1996. Unfortunately, they had a difficult time developing a ride vehicle that would give the right sensation, so the idea was put on hold.

7. An Erector Set was Key

Luckily, one innovative Imagineer, Mark Sumner, kept thinking about the concept. He ended up creating a model of the current ride system in his attic using an old Erector Set and some string. While the actual ride vehicles are made from more than building toys, they are almost identical to Sumner’s original idea.

8. The Soundtrack is Original

Those who have ridden Soarin’ numerous times know the music that goes along with it by heart. That music is actually a completely original soundtrack! It was written specifically for the original film by Jerry Goldsmith, and was rewritten by Bruce Broughton for the new film. Both versions are incredible, and many believe the music is the best part of this fabulous ride.

Soarin’ is a truly awesome attraction that every Disney fan needs to experience at least once, if not multiple times. Next time you’re in Disney World, be sure to hop on this one, watch for hidden Mickeys, and listen for that amazing soundtrack.