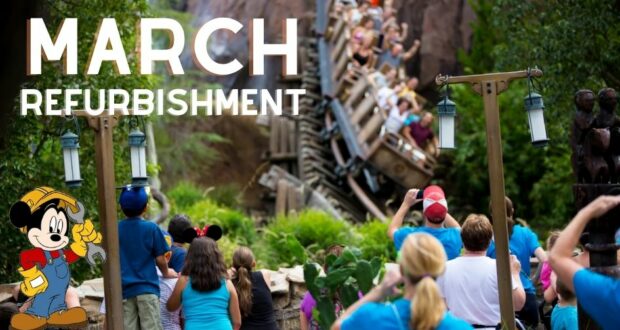 Spring is right around the corner! As we welcome warmer weather in March, a visit to Walt Disney World Resort is surely in the works. Before you hurry on out to enjoy the EPCOT International Flower & Garden Festival or welcome the fire-breathing Maleficent dragon back to Magic Kingdom’s parade route, here are a few scheduled refurbishments you’ll want to be aware of before you go.

Sorry Water Park enthusiasts! Disney’s Blizzard Beach’s closed for the season on January 1, 2022, for refurbishment and Disney has yet to reveal a reopening date. Still in the mood to enjoy a Water Park? Check out Disney’s reopened Typhoon Lagoon Water Park which is welcoming Guests with new Dole Whip treats and excitement!

The closure continues! The Walt Disney World Railroad at Magic Kingdom Park has been closed since December 3, 2018, due to the construction of the new attraction Tron Lightcycle / Run. While we have seen the Railroad being tested, there is still much doubt the new TRON coaster will be ready to open in 2022, leaving us wondering what that means for the Walt Disney World Railroad. The Railroad is listed on the refurbishment calendar through May 9, 2022, which is as far as the refurbishment calendar currently goes.

Visiting Disney’s Animal Kingdom Park? Take note that one of the most iconic attractions in the Park is currently closed for a lengthy refurbishment. While Disney lists the refurbishment of Expedition Everest – Legend of the Forbidden Mountain to be closed “from January 4 through mid-April 2022”, recently, it’s been noted on the refurbishment calendar that the refurb is likely extended into May. While many of us Disney fans would love for the large Yeti animatronic (AKA “Disney Yeti”) to be fixed, it seems like the closure is to work on the ride control system.

If you have plans to stay at Disney’s Art of Animation Resort take note that from February 7 – mid-March, the Schoolyard Splashground near the Big Blue Pool will be unavailable. From late February through mid-April 2022, Cozy Cone Pool will be closed. As the work takes place, other pool and recreation offerings will remain open including The Big Blue Pool.

RELATED: Guests Will Say Goodbye to the Tower of Terror Attraction at Hollywood Studios This Year, at Least for a While

As we see experiences such as The Grand Spa return to Disney’s Grand Floridian Resort & Spa, it’s good to be aware that the Deluxe Resort is undergoing a transformation of several Resort rooms in preparation of becoming part of Disney’s Vacation Club. Disney has noted the refurbishment begins March 1, 2022. Guests may see or hear construction during daytime hours but most Resort hotel amenities will remain available. They have also noted for Guests to please allow for additional travel time during this refurbishment period.

But, wait! With the March 2022 refurbishments comes the excitement of big plans Disney has headed our way SOON:

Finding Nemo: The Big Blue and Beyond will open at Disney’s Animal Kingdom this year, plus we’ll welcome back Fantasmic! at Disney’s Hollywood Studios. Dates have yet to be released but Disney has promised 2022! Plus, the 50th Anniversary celebration, “The World’s Most Magical Celebration” will continue all throughout 2022.

If you’re visiting Disney’s Hollywood Studios or EPCOT, you’ll be happy to know it is currently listed as being free from refurbishment/closures. Keep in mind, the refurbishment schedule is listed to help us plan but it is not set in stone. Disney has been known to extend refurbishments, shorten them, and even close attractions and/or shops suddenly for refurbishment. We’ll keep you updated as we cruise through March 2022!