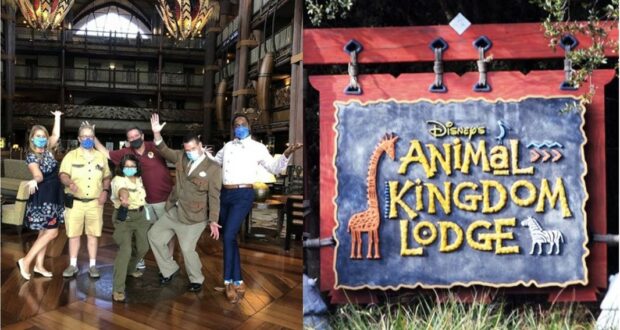 Jambo (that’s “Hello” in Swahili), Disney fans! We have exciting news to share as Walt Disney World Resort has officially reopened one of our very favorite Resorts, Disney’s Animal Kingdom Lodge! While Disney’s Animal Kingdom Kidani Village Villas have been open to Disney Vacation Club Members for some time, the Jambo House and regular Disney Resort Hotel Guest bookings have been unavailable at the beloved Resort until now. We’ve seen the reopening of favorite Resorts like Disney’s Polynesian Village Resort, Disney’s Wilderness Lodge, and Disney’s Grand Floridian Resort, but we can’t help but be extra excited about Animal Kingdom Lodge’s return!

Not only is there excitement surrounding the reopening of the Animal Kingdom Lodge, but we’re also thrilled with updates in Walt Disney World dining. Boma Flavors of Africa within the Resort has reopened as Disney’s first buffet to return since the start of the COVID pandemic. Plus, if you need a refreshing beverage, the popular Animal Kingdom Lodge lounge – Victoria Falls – has officially reopened as well. With so much excitement, it’s no wonder Disney’s Cast Members are celebrating!

As shared via Walt Disney World Cast & Community on Facebook: “Cast Members at Disney’s Animal Kingdom Lodge welcomed Guests back to the resort today, marking yet another special reopening at Walt Disney World. This year, the resort celebrated its 20th anniversary. “Asante sana!” to all of the dedicated Cast Members who bring Disney’s Animal Kingdom Lodge to life every single day! #DisneyCastLife”

Moving on over to Instagram, Walt Disney World Ambassadors shared, “Jambo from Disney’s Animal Kingdom Lodge! We stopped by to congratulate our fellow Cast Members as they officially reopen to our Guests today … and to celebrate the Resort’s 20th year of magic at Walt Disney World. You could say we had a WILD time! #DisneyCastLife”

We love the excitement! If you’re making plans to visit a Disney Park during the 18-month celebration of their 50th Anniversary kicking off October 1, consider staying at the one and only Disney Resort where you can wake up to see the stunning savanna with roaming exotic animals right outside your balcony! Just a hop away from Disney’s Animal Kingdom Theme Park, you simply can’t go wrong with this wonderful Resort. If you find yourself stuck at home for now – have no fear! You can have a taste of Disney’s Animal Kingdom Lodge right at home with Disney’s recipe for the popular Sanaa bread. Welcome back to all the Animal Kingdom Lodge Cast Members and Guests! Next up, we’re ready to see the return of the next Walt Disney World hotel reopen in October which is Port Orleans Resort.