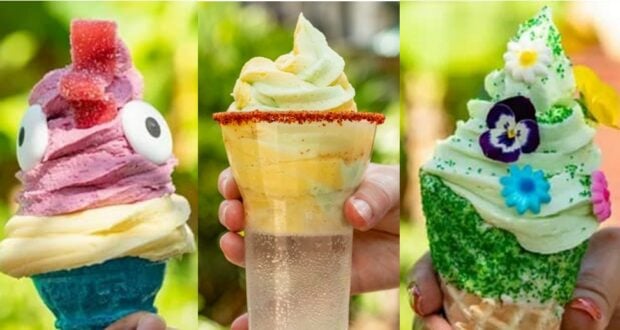 Calling all Disney foodies! If you’re a lover of DOLE Whips (of course!), well, Disney is introducing a fantastic lineup of new DOLE Whips that will soon be available at this fan-favorite Disney Park!

That’s right, Disney has announced its Typhoon Lagoon Water Park will finally be reopening on January 2, 2022. While enjoying Blizzard Beach has been fun, the excitement is building as Disney fans are ready to once again speed down Crush ‘n’ Gusher, Humunga Kowabunga, and chill in the Typhoon Lagoon Surf Pool. While you’re learning to surf with special lessons and taking in the Florida sun, you’re sure to work up an appetite.

Move over Magic Kingdom’s Aloha Isle! Nothing says Disney Water Park food like a deliciously refreshing DOLE Whip. The iconic snack is coming to Typhoon Lagoon in a big way with an enticing DOLE Whip menu at the Snack Shack. Enjoy snacking on Snack Shack’s chicken quesadilla, chicken wrap, shrimp cocktail, and more… but be sure to save room for a Disney DOLE Whip – or two!

RELATED: Everything You Ever Wanted to Know About Dole Whip

Disney has announced, “DOLE Whip menu offerings at the shipwreck-inspired eatery, Snack Shack. In addition to two Moana-inspired DOLE Whip character cones, Guests can tantalize their taste buds by building their own tropical flavor combination with their choice of mango, lime, raspberry, or pineapple DOLE Whip.”

RELATED: Disney Lists ALL Dole Whips & Where To Find Them

RELATED: 1,200 Dole Whips and a few other Disney things you can buy INSTEAD of boarding the Galactic Starcruiser

You could also check out the iconic Sand Pail which includes Chocolate and Vanilla Soft-serve Ice Cream, Waffle Cone Pieces, Oreo Cookie Pieces, Sprinkles, Hot Fudge, Caramel Sauce, Whipped Cream, and a Cherry. Layered into a Sand Pail to be scooped out with a Shovel!

Which of these DOLE Whips and/or ice cream specialties are you planning on trying? Let us know in the comments!