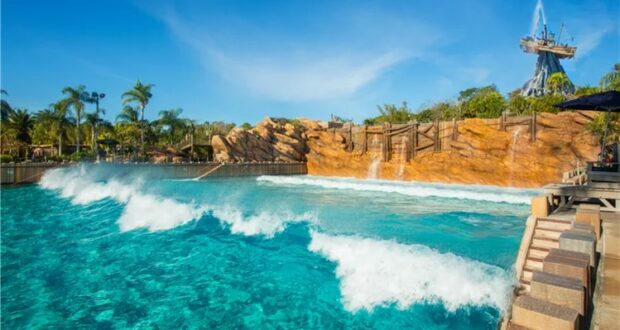 Exciting news coming out of Walt Disney World Resort this morning! The lengthy closure of Disney’s Typhoon Lagoon Water Park is coming to a close as Disney has announced the official reopening of the fan-favorite Disney Park.

Of the two Walt Disney World Resort Water Parks, Disney’s Blizzard Beach has been the only option for Guests to enjoy since COVID-19 closures closed the Parks back in March 2020. When Blizzard Beach reopened in March 2021, we were hopeful Disney’s Typhoon Lagoon would follow shortly. Now, several months later, the second Water Park will finally welcome Guests!

Disney has announced, “The 50th-anniversary magic continues at Walt Disney World Resort as Disney’s Typhoon Lagoon Water Park prepares to reopen Jan. 2, 2022. Offering tropical family fun for all ages, the Park’s reopening will mark the return of favorite attractions and the debut of new menu items and other commemorative culinary features.“

“Known for its immersive storytelling, thrilling water attractions, and family fun, the Typhoon Lagoon tells the fabled tale of a rogue storm and its ensuing tidal wave that wreaked havoc on a formerly pristine waterside paradise. From topsy-turvy architecture and storm-strewn nautical gear to the stranded shrimping ship, Miss Tilly, impaled upon the summit of Mount Mayday, each detail brings the legend to life for Guests in different ways.”

Disney has announced several of the popular attraction and features will be returning when the Park reopens on January 2, 2022, including:

The Surf Programs will restart!

Hungry? Well, you’re in luck! Guests will encounter a selection of mouth-watering new DOLE Whip menu offerings at the shipwreck-inspired eatery, Snack Shack. In addition to two Moana-inspired DOLE Whip character cones, Guests can tantalize their taste buds by building their own tropical flavor combination with their choice of mango, lime, raspberry, or pineapple DOLE Whip.

Plus, what’s a 50th Anniversary celebration without special 50th-anniversary menu items?! To mark the 50th anniversary of Walt Disney World Resort, Typhoon Lagoon will add several new menu items and features as part of “The World’s Most Magical Celebration,” such as:

Tickets and details are available via Typhoon Lagoon’s webpage.

Are you making plans to visit Disney’s Typhoon Lagoon in the New Year? Let us know in the comments!