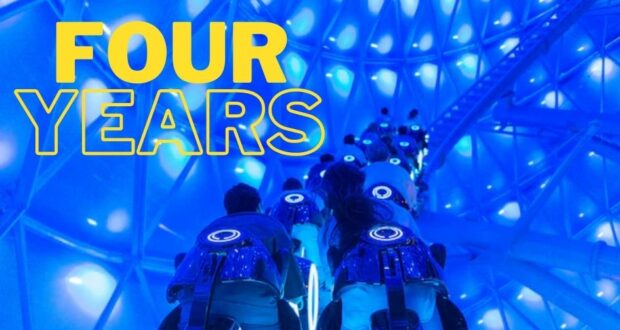 When TRON opened at Shanghai Disneyland in June 2016, it was met with much success. The semi-enclosed launched steel motorbike roller coaster attraction is based on the Tron franchise, as it takes Disney Guests on a ride through “the Grid” on their own light cycle vehicle. Of course, it only made sense to bring this impressive attraction to Walt Disney World Resort!

During a D23 Expo, Disney announced on July 15, 2017, they would be opening TRON in the Tomorrowland portion of Magic Kingdom Park. Clearing of the ride location at Magic Kingdom began in February 2018, with the hopes that the attraction would be ready to welcome Guests in time for Walt Disney World Resort’s 50th Anniversary celebration which kicked off on October 1, 2021.

As we ride through 2022, there are signs that TRON may not be complete in 2022, and instead, it seems like 2023 is a better guess as the possible opening year for the new roller coaster.

With the COVID-19 pandemic hitting Disney Parks hard in 2020, construction came to a halt which obviously didn’t help forward progress. As a result, the beloved Walt Disney Railroad has also remained closed since December 3, 2018, due to the TRON construction which required track adjusting.

Of course, Universal Orlando Resort has had a little fun with the extremely slow construction by taking to social media suggesting TRON won’t be complete until “Summer 2072.” If TRON opens in 2023, that’s a full 6 years since it was first announced to the public (2017). That means 6 years for one Magic Kingdom roller coaster. Meanwhile, Universal is expecting an entirely new Theme Park within 6 years called Epic Universe which was announced in 2019 and will likely be complete in 2025.

The good news is we know the attraction will be worth the wait! Just check out this ride through of the Shanghai Disneyland attraction:

While we keep an eye on TRON’s construction progress, we are thrilled with Disney’s confirmation that EPCOT’s Guardians of the Galaxy: Cosmic Rewind roller coaster is scheduled to open this summer.

2022-02-14
Jamie Sylvester
Previous: Is Splash Mountain Still Being Reimagined? Disney Oddly Drops Reference
Next: How Much Is Too Much? Did This Disney Adult Cross The Line?