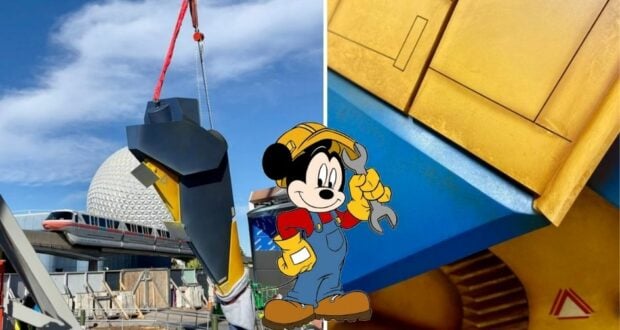 Exciting news coming out of Walt Disney World Resort! The highly-anticipated EPCOT roller coaster, Guardians of the Galaxy: Cosmic Rewind, has reached a new milestone in its current state of construction!

We’re thrilled to hear from Walt Disney Imagineer, Zach Riddley, that the indoor roller coaster attraction is picking up speed as it begins the installation of a key focal point for the Marvel Cinematic Universe Guardians of the Galaxy themed Disney ride.

After EPCOT’s incoming attraction was announced at D23 in 2017, we’ve been eagerly taking in all the details Disney dishes out! We’ve watched as the family-friendly adventure has taken shape in the former location of Ellen’s Energy Adventure in the World Discovery portion of the Disney Park (AKA former Future World).

This “new type” of a roller coaster is to feature incredible storytelling, as your ride vehicle will rotate 360 degrees so the rider is always focused on the storytelling pieces of the attraction. Plus, Guardians of the Galaxy: Cosmic Rewind will feature the first reverse launch on a coaster in Disney history, as well as be named one of the longest enclosed coasters in the world.

Now, @thezachriddley has taken to Instagram to share an update as of January 24, with the news, “A new year brings continued progress at EPCOT. Today I’m excited to share our team has started the installation of the Nova Corps Starblaster ship that will mark the Guardians of the Galaxy: Cosmic Rewind entrance at EPCOT. Over the coming weeks we’ll be assembling the 51-foot-tall ship, adding finishing details and tying in the landing pad area that surrounds the ship. Swipe for a teaser photo and concept art (shown below) of the cockpit that’ll be going in soon!”

“Once complete, this ship will be the signature icon of the Wonders of Xandar pavilion and immediately establish the Xandarian storyline guests will discover inside this new attraction. Plus, the bold blue and gold colors will make this a stunning new addition to World Discovery. We can’t wait to share more details as we bring the first-ever, full-size Nova Corps ship to life here at EPCOT (and you can join along and watch from the monorail too!).”

It sounds like Walt Disney Imagineering is hard at work! Check out Zach’s six photos below of the new Nova Corps Starblaster ship:

RELATED: Is Guardians of the Galaxy: Cosmic Rewind Near Completion? Landscaping Begins!

When will Guests finally have a chance to ride this brand-new Guardians-themed coaster? We’ve previously shared the news that Disney revealed all will be ready to roll in Summer 2022!

Are you making plans to visit EPCOT this Summer to enjoy the new attraction? We’ll keep you posted as Disney has yet to release an official grand opening date.

2022-01-24
Jamie Sylvester
Previous: Look who’s back to greet Guests at EPCOT (plus a PhotoPass surprise for Guests)!
Next: PIXAR is fighting tooth & nail to keep its upcoming “Lightyear” film from being dumped on Disney+