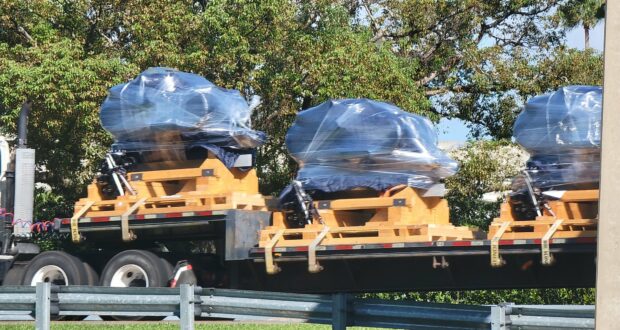 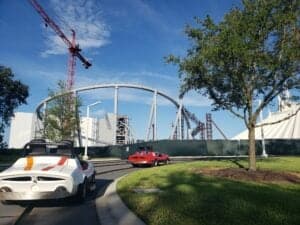 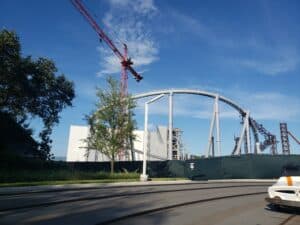 Credit: Becky BurkettProgress has only continued, and just yesterday, a rig with a flatbed trailer was spotted at the Transportation and Ticket Center Tram overpass bridge near Magic Kingdom, and if you take a close look, you can see what looks like TRON Lightcycle ride vehicles underneath all the heavy plastic.

Yep, those are definitely NOT Guardians of the Galaxy ride vehicles! 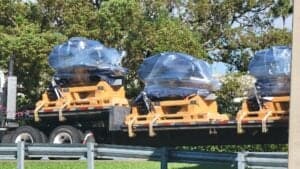 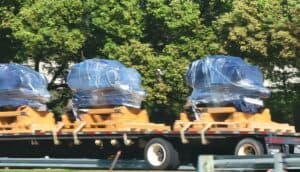 RELATED: We finally know when Guardians of the Galaxy: COSMIC REWIND is opening, kind of.

During the 2019 D23 Expo in California, one of the TRON Lightcycle Power Run ride vehicles was on display. Let’s compare the two to see for sure if that’s what’s under the plastic. What do you think? 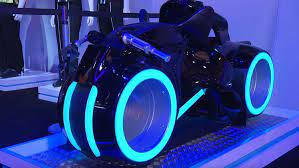 The arrival of ride vehicles we’re closer than ever to the opening of Magic Kingdom’s newest thrill ride attraction!  Once ride vehicles are installed on the tracks of the coaster, further testing can begin on the experience itself.

The TRON Lightcycle Power Run experience is already enjoyed by Guests at Shanghai Disneyland. The attraction is based on the 1980s futuristic flick, TRON.

“Experience high-speed thrills and chills as the Grid comes alive in a heart-pounding race for survival. Created as a friendly way for “Programs” and “Users” to interact, the Power Run pits team against team in the quintessential quest to capture 8 Energy Gates and triumph over opponents.

Prepare for digitization after entering the portal—this is your access into the energy, lights, and excitement of TRON’s high-tech universe. As you leave the real world behind, you’ll proceed to the games as a member of Team Blue, ready to compete against some of the Grid’s most menacing Programs.”

We anxiously await the opening of the newest coaster at Magic Kingdom since Seven Dwarfs Mine Train, which opened in May 2014 as a part of the New Fantasyland expansion project.

2021-10-14
+Becky Burkett
Previous: Disney’s Yehaa Bob Jackson Is Back – But You Aren’t Allowed to Sing Along
Next: Disney World Unveils Exciting 2021 Holiday Plans!