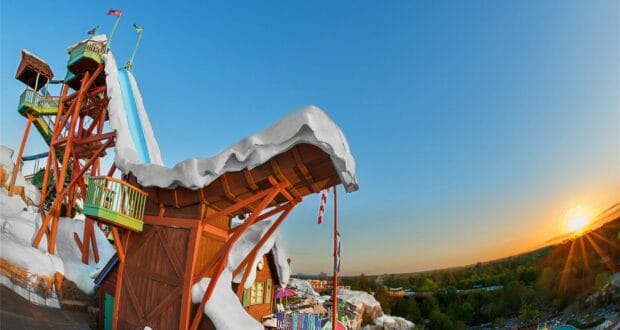 After months-long closure, we were thrilled to learn the news that Walt Disney World Resort’s Typhoon Lagoon is opening next year! On the heels of the big Typhoon Lagoon reopening announcement, we are learning Disney’s other Water Park will be closing for refurbishment.

While we had hopes of finally being able to enjoy the two Disney Water Parks, it looks like we’ll be sticking to one Water Park for now. Blizzard Beach first reopened back in March 2021 and will soon be closing for refurbishment with Typhoon Lagoon opening its doors on January 2, 2022.

Disney reported the refurbishment update with “Disney’s Blizzard Beach Water Park is closing for refurbishment; January 1, 2022, will be its last day of operation. However, Disney’s Typhoon Lagoon Water Park will reopen on January 2, 2022!”

How long of a refurbishment and/or what maintenance will be taking place has yet to be released. Rumors are flurrying on social media that the refurb may be lengthy for Blizzard Beach, but Disney has yet to confirm this information.

We do know Disney’s Typhoon Lagoon is stepping up the Water Park fun come January 2nd, 2022. We’re thrilled to learn the news that a new variety of DOLE Whips will be coming to the Park along with specialty 50th food and beverage items!

Time to shift the Disney Water Park fun from Blizzard Beach to Typhoon Lagoon, in hopes we’ll be able to scream our way through Summit Plummet, float down Cross Country Creek, and hold on to the family in Teamboat Springs in the near future.

Do you have plans to visit Disney’s Blizzard Beach in the New Year? Let us know in the comments.