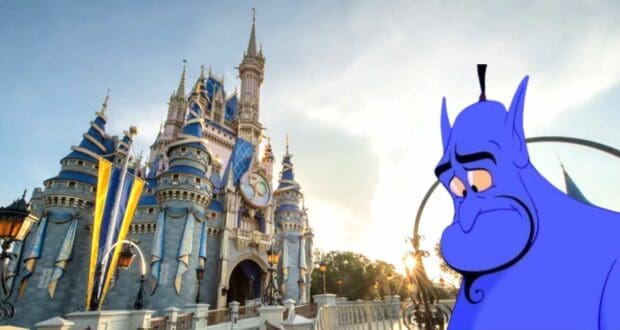 Disney Genie+ Is 1-Year-Old; Check Out Its Unfortunate Timeline

It’s hard to believe, but services including Disney Genie, Disney Genie+, and individual Lightning Lanes are officially one-year-old. Sadly, we don’t feel like celebrating. Instead, check out the timeline of the Disney Park system’s unfortunate evolvement in just 365 days.

Flash back with us to 2019. Visiting the Walt Disney World Resort was seemingly as magical as one could dream of. Disney’s Magical Express transported Resort Guests to and from the Orlando International Airport to their Disney Resort free of charge. Resort Guests also received complimentary MagicBands with their stay. Both are now a thing of the past.

Disney Park hopping wasn’t confined by a timeframe, and there was no speak of needing a Disney Park Reservation to enter Magic Kingdom Park, EPCOT, Disney’s Hollywood Studios, or Disney’s Animal Kingdom.

And one of the BEST experiences was the complimentary FastPass system. This system allowed Guests to select attractions to skip the normal standby line for, leaving Guests more time to enjoy visiting the Disney Park instead of standing in lines.

Guests would visit the select attraction during the designated time and enter through the FastPass line. It was brilliant and made ALL Guests feel that extra special VIP treatment at no additional cost.

The Walt Disney World Resort Parks closed due to the COVID-19 pandemic. Little did we know this would also be the end of several Disney experiences that we obviously took for granted… including the FastPass+ system.

Roughly four months after COVID-19 closures of the Disney Parks, Walt Disney World Resort began its phased reopening. Park Pass reservations were required to make space for social distancing. There was no sign of FastPass, but it wasn’t needed anyway with the small crowds.

As 2020 progressed into 2021, the need for FastPass+ to return grew as social distancing began to be removed and more and more Disney fans were visiting the Parks.

Instead, Walt Disney World Resort and Disneyland Resort would be rolling out 1) Disney Genie (a complimentary Genie assistant in the My Disney Experience App), 2) Disney Genie+ (basically the same as FastPass+ but now skip the line for a fee), and 3) individual Lightning Lane selections (the most popular Disney attractions not included in Genie+ with skip the line access for an a la carte payment).

Fans were UPSET. The release of the Disney news and YouTube video of the confusing Genie puzzle was not met with open arms by the Disney fandom. Instead, the video almost immediately dropped into a huge “dislike” status on YouTube.

The system was not without its flaws during its initial launch. Disney was constantly updating and changing the system details in an attempt to make the process as seamless as possible for Guests.

A couple of months after Walt Disney World’s launch, Disney Genie, Disney Genie+, and individual Lightning Lanes arrived at Disneyland Resort for $20 per person per day.

Disney seemed to admit its fault with Disney Genie+. The line-skipping service policy was adapted to include that Guests should only expect 2 or 3 line skipping attractions per day when purchasing Disney Genie+. A disappointing update, to say the least. The adjustments continued for Disney Genie+ and individual Lightning Lane attractions.

In Disney earnings call, The Walt Disney Company CEO Bob Chapek credited the new paid service with being partially responsible for the massive increase in revenue for the company’s Parks and Experiences arm. CFO Christine McCarthy stated that 50% of all Guests purchase the premium service.

Just when Disney fans seemed to be learning the new way of Disney Genie+, Disney quietly revealed a bombshell of a price hike for the service. Overnight, Disneyland Resort bumps its $20 per person per day for Genie+ to $25 per person per day at Disneyland Park and Disney California Adventure Park.

Walt Disney World Resort wastes no time and implements a price hike in Disney Genie+ at $20 per person per day instead of the former $15 price. Individual Lightning Lane attractions also spike in price.

Disney attempted to hide the news with an update that Disney’s Hollywood Studios will open “Fantasmic!” sometime in November… but they lacked an actual opening date. The blow at Disneyland was hoped to be softened by the news of MagicBand+ launching on October 26, but no one seemed to care.

Disney Genie+ at Walt Disney World Resort jumped to its highest price yet at $22 per person per day.

Pricing for Disney Genie+ continues to fluctuate. On October 18, 2022, Genie+ dropped to its lowest price since the $15 per person at Walt Disney World to $18 per person.

So, we suppose a Happy Birthday is in order for Disney Genie, Disney Genie+, and individual Lightning Lanes??

If the past is proof of what can happen in the near future, we are nervous about finding out what the theme park has in mind when the holiday months arrive. We suspect the cap of $22 for Disney Genie+ will seem small compared to the holiday Disney Genie+ price tag… but only time will tell.