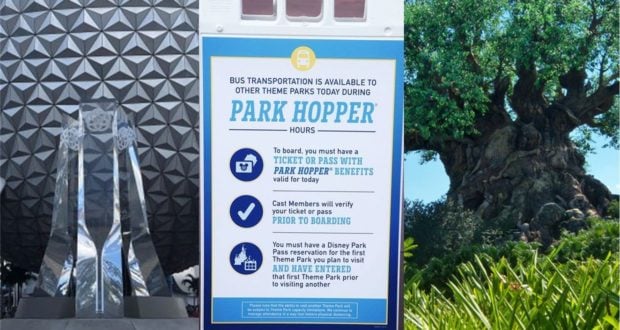 When the four Walt Disney World theme parks reopened back in July, guests were able to visit only one park per day. On January 1, 2021, a modified version of the Park Hopper Option returned! It’s a bit different than before. Here’s our first experience.

Before you can Park Hop, you need to have a Disney Park Pass Reservation for the first park. We chose Epcot, because that is usually the easiest park to get a reservation for. We wanted to try for a “harder” park later in the day. You need to have scanned into the park before you are eligible to head to a second one. You of course need to have a ticket that has the Park Hopper Option.

With the new system, you can hop to a second park after 2:00. According to a Disney Parks Blog post from November 20, “Guests will soon be able to check DisneyWorld.com/ParkHours and the My Disney Experience app for the most up-to-date Park Hopper hours.” We assumed that meant that you could go on the My Disney Experience App at 2:00 and see a list of parks with availability. If there is such a spot on the app, we couldn’t find it. We searched for “Park Hopper Option” on the app, and it took us to the “how it works” page for Park Hopping. There’s a link for “Park Hopper hours” on that page, which then took us directly to the Walt Disney World website. The hours for Park Hopping are listed there, but there was nothing about whether or not each park had availability.

We chose Disney’s Animal Kingdom for our second park. When leaving Epcot we noticed that the park to park buses were running again. There were cast members scanning MagicBands and then sending guests into a waiting area for their second park. We drove, so we did not head in that direction.

Things got a bit confusing when we arrived at the toll plaza at Disney’s Animal Kingdom. The cast member asked if we had a reservation, and we said yes. After scanning a MagicBand he noticed that the reservation was for Epcot. We told him that we wanted to Park Hop. He then said that Disney wanted people to make a reservation in order to do that. (That information was opposite of what the Walt Disney World website says.) He said that we’d need to make that reservation in the My Disney Experience App. We explained that we had been told that a second reservation wasn’t needed. He told us to go ahead and park, but that without a reservation we might not get in.

Confused, we parked the car and walked to the entrance. Before we parked we tried to make a second reservation for the day, but the Disney Park Pass System wouldn’t let us because we already had the reservation for Epcot. We decided to just try to scan into the park. We had no problem entering Disney’s Animal Kingdom, we did not need a second reservation. The fact that we had driven instead of taking a bus didn’t seem to matter.

One thing that we were concerned about is that the ability to Park Hop would increase the crowd level in the afternoon. It really wasn’t bad. The Wait Times were long, but they weren’t any longer than a normal weekend day lately. Considering that it was New Year’s Day the park didn’t feel busy at all.

There are some kinks that need to be worked out before we can call the modified version of Park Hopper a success. A lot of it has to do with what the Cast Members are being told. There is a lot of confusion and misinformation right now. Some guests have been told that you can only enter one extra park a day, while other people have already been in three. There’s some confusion on whether or not you can reenter your first park if you have scanned into a different one. Something needs to be done to make it easier to find out which parks have availability! Still, it was nice to be able to leave one park and visit another. We are glad that Park Hopper has returned. We’ll be trying it again soon.