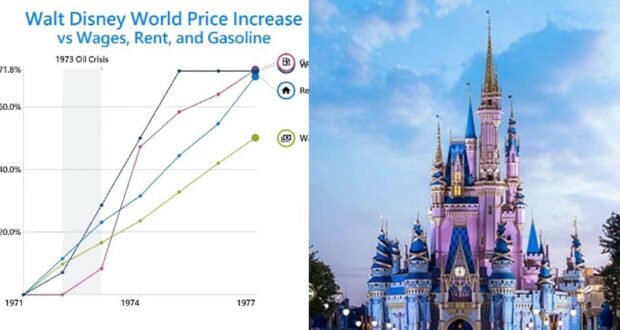 You just never know which video is going to go viral next when it comes to social media! It’s no surprise Disney is the center of several viral videos. Some videos are super cute and you can’t help but watch them a couple of times, such as the viral video of a Disney Cast Member’s joke about directions. Other Disney videos go viral for all the wrong reasons, such as the Magic Kingdom Ferry Boat fight. The latest viral video is different in that it is all about Disney Theme Park data… and makes our eyes widen in shock as it continues!

We previously shared the news that according to a new study conducted by a company called Koala, a Walt Disney World 1-day ticket price will rise to $250 plus in just 10 years according to the study’s calculation projections. Can you imagine paying $250 for a one-day Disney Park ticket? Well, with the video below, it wouldn’t surprise us.

@piechartpirate shares a viral TikTok video to show an intriguing video chart, noting, “Walt Disney World ticket price increase since 1971 #disney #disneyworld #inflation #datatok”. The video compares Walt Disney World price increase vs. wages, rent, and gasoline from 1971 to 2020. All we can say is WOW. We had to watch it a couple of times! Check out the video below:

YIKES! It’s not shocking that Disney’s prices increase, but the rate of growth versus wages, rent, and gasoline is what makes the growth look so painful. Most recently, Disney has introduced the new Disney Genie which is an upcharge from the former complimentary FastPass program. On top of that optional Disney Genie charge, Disney has dropped complimentary services as of recently including the Magical Express ending this year, free Resort Guest and Passholder Magic Bands, and free Guest parking at Resorts. Plus, the new Annual Passholder program has dropped the free PhotoPass service and special events have seen an increase in price. We can’t help but wonder what a Disney vacation will look like in the next 5-10 years for us Disney fans. Ouch! Slow it down Disney.