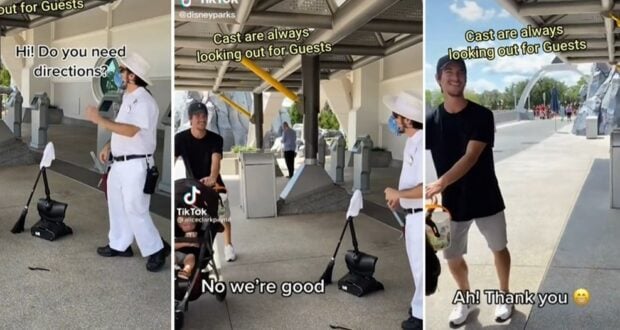 You never know which Disney video will go viral next on social media! We’ve seen our share of entertaining videos, to say the least. Sometimes viral videos are extra sweet. Remember the video of the sweet little boy greeting Disney Princesses with a sweet hat nod? Or how about when Cinderella’s stepsisters, Anastasia and Drizella, tried on a Guest’s slipper and were thrilled that it fit? And we can’t help but mention the time the little girl took off running away from Jack Sparrow. Of course, with the good videos come the bad – showing that Cast Members know how to adapt! Take the woman that touched Gaston on the chest and him demanding she leaves, or even the video of Cast Member having to ask a Disney Guest to leave the Park for her actions. It’s always something! We’re thankful, however, today, we have a super cute Disney Cast Member joke to share that is going viral on TikTok.

Disney Parks took to TikTok to share one Cast Member’s directions joke in this short and sweet video that already has over 600,000 views. This particular Cast Member is located in Walt Disney’s World’s Tomorrowland Terrace near the former Stitch’s Great Escape where he helps with directions as shown in the video below:

Too cute! When you see a Cast Member be sure to give them a hello and even a big THANK YOU! Much of their work may go unnoticed, but they are the true pixie dust behind the scenes, keeping the magic alive and well.