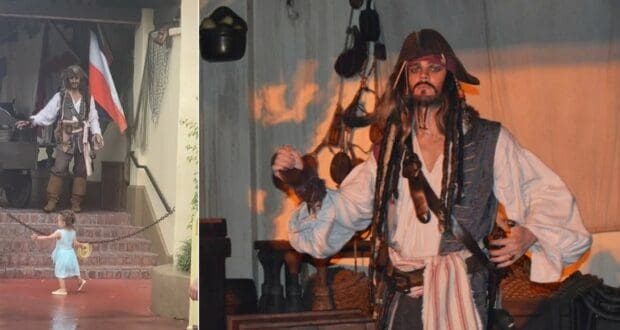 Ahoy, Me Hearties! If you’re headed to Walt Disney World, chances are you are well aware that character meet and greets are currently a thing of the past. While you may not be able to hug Mickey, high five Buzz Lightyear, or get a Disney Princess autograph right now, we are thankful Disney characters are available in different locations throughout the Parks, making appearances at a safe distance. One of the characters you may spot is none other than Captain Jack Sparrow! One little girl recently spotted him during a visit to Magic Kingdom’s Adventureland, and didn’t like what she saw!

RELATED: Me Hearties, There’s a Petition To Rehire Johnny Depp For Pirates Of The Caribbean

Magic Kingdom previously featured a Captain Jack Sparrow Pirate Tutorial which was a fun experience for kids and adults alike as Sparrow would teach young and old the ways of the pirates. @tem1322 took to TikTok to share a video of a sweet little girl that seems rather frightened by Jack Sparrow – and made a beeline to safety through the rain! It’s no wonder this adorable video has gone viral with over 926,000 views! Plus, kudos to the person that put the TikTok video together as the Pirates of the Caribbean music goes along perfectly with the moment. Check out the video below:

Poor thing! We’re pretty sure she thought Captain Jack Sparrow wasn’t a real person, but perhaps a statue as he stood still. Plus, he always shows off a fantastic costume and plenty of makeup. As he moves, she definitely decides she wants nothing to do with him and gets out of there quickly! Even Jack Sparrow looking concerned that he has frightened the little one. Do you have a funny memory of your little one being scared of Disney characters? It most definitely happens and yes, sometimes goes viral for everyone to get a smile from!