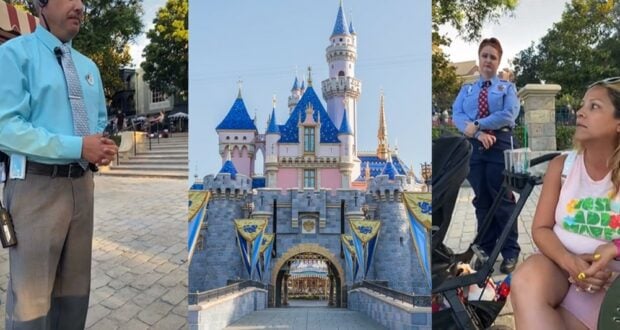 Well, Disney friends, you just never know what you’re going to see or hear when you visit a Disney Park. There are several Disney moments that have gone viral that leave us all scratching our heads. This past Labor Day weekend, a video went viral of a fight breaking out on the Magic Kingdom ferry boat. And who can forget about the time the Disney World Guest thought it was a good idea to jump off the Living with the Land boat ride to steal a cucumber while visiting EPCOT?! This viral video coming out of Disneyland Resort is no different and if anything leaves us with more questions.

A Disneyland Guests visiting the theme Park is shown in the video below being asked to leave the Disney property by a Cast Member from management. The video begins mid-conversation so ultimately the “what happened” to cause them to get to this point is still in question. Comments associated with the post share that the Disney Guest had the urge to use the restroom and decided to do so, in public, in a cup.

While yes, the woman does mention peeing in a cup for work because of her bad bladder, the actual facts of the situation are unknown. Here’s the video below which has over 810,000 views on TikTok since it was posted by @jamiespearspregnancytest:

So, there you have it. What do you think happened? All we know for sure is that Cast Member “Tom” did a fantastic job keeping his cool throughout the situation. There are several restrooms spread throughout Disneyland. Of course, there have been times when we’ve had to wait in line to use the restroom, but it’s never an exceptionally long wait. The crowd level surrounding the situation in the video doesn’t look excessive either. This isn’t the first or the last Disney viral video we can expect to hit social media. Until next time, Disney fans!

2021-09-09
Jamie Sylvester
Previous: ‘A whole lot of cuteness above NYC’: Baby Yoda gets big, will soar over the city on Thanksgiving Day
Next: Another Slight Change to Disney App For Virtual Queue Process