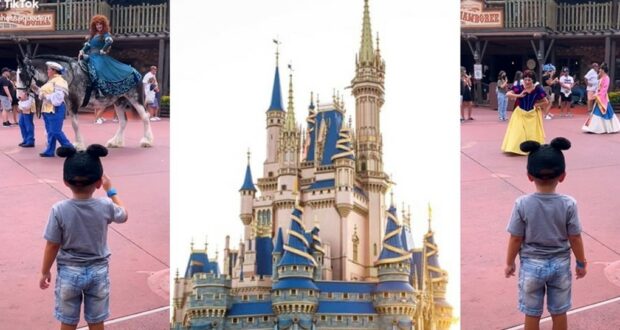 Sometimes you scroll across something on social media that puts all the negativity on the back burner and delivers a moment of much-needed sweetness. Recently, a true Prince Charming visited the Disney Parks and is going viral because of his sweet gesture to the Disney Princesses passing by.

RELATED: What To Know About Walt Disney World Cavalcades

A young boy is seen in the video standing in Frontierland across from Country Bear Jamboree at Magic Kingdom Park. The Royal Princess Processional is full of Disney Princesses such as Mulan, Tiana, Rapunzel, Little Mermaid, Belle, and more. The Princesses move through the Park’s parade route in cavalcade form to wave at Disney fans along the way. One young man had a Disney Princess or two take note of his sweet and very gentleman-like gesture that is just too cute. It’s no wonder this TikTok video has gone viral with over 32 million views!

He’s adorable and the TikTok song choice is perfect! We love how Princess Merida, Princess Snow White, and Princess Elena of Avalor take special notice of the little guy’s gesture. It’s something simple but so gentlemanly like that it’s simply adorable. At a time when Disney character meet and greets are on hold due to COVID 19, we enjoy seeing a more intimate reaction outside of the standard wave.

RELATED: All Cavalcades Removed from EPCOT’s Entertainment Line Up

Take note that while The Royal Princess Processional at Magic Kingdom is still one of the cavalcades offered, EPCOT has removed all cavalcades from their World Showcase route. Instead, you’ll spot Disney Princesses and characters spread throughout the Park at socially distanced locations. We can’t help but wonder when the Magic Kingdom “Festival of Fantasy Parade” may return and what the future of the character meet and greet may look like. In the meantime, we’re thankful for this sweet moment between a young boy (Disney’s true Prince!) and Disney Princesses!