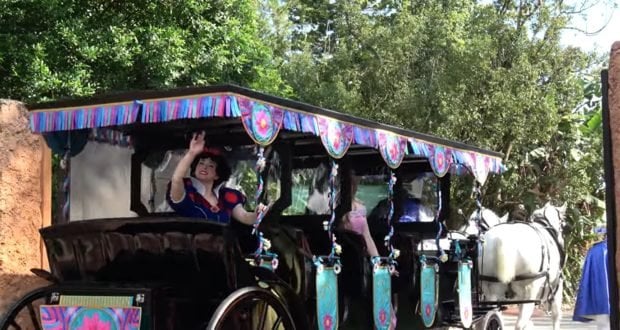 All Cavalcades Removed from EPCOT’s Entertainment Line Up

Walt Disney World has had its first-ever “World Princess Week” which began on Monday, August 23 with special princess-themed treats throughout the Disney Park and Resorts. We previously shared the news that a new Tiana-themed playground is coming to EPCOT. Before Princess Week kicks off, however, Disney has removed the last of their EPCOT cavalcades, the “Princess Promenade”. The “Princess Promenade” cavalcade (video here) was a carriage filled with favorite Disney Princesses such as Belle, Aurora, Jasmine, and Snow White that would move slowly through EPCOT’s World Showcase with Princesses smiling and waving at Park Guests. Does this mean we’ll no longer see Disney Princesses at EPCOT? Thankfully, no! You will still have your chance to spot several Princesses throughout EPCOT’s World Showcase.

EPCOT has already removed the “Frozen Promenade” cavalcade (video here) where Guests could see the popular Frozen sisters, Elsa and Anna. The “Mickey and Friends World Tour” cavalcade has also ended where Guests spotted Mickey, Minnie, Goofy, and Pluto throughout the World Showcase. So, what’s next for these characters? EPCOT is moving them into socially distanced locations.

Queen Elsa and Anna from Frozen have already been greeting Guests in their home Pavilion, Norway, with socially distanced barriers. While you can’t hug or ask for autographs at the moment, you can still snap a photo with the Princesses not too far behind you. Snow White has been spotted once again in the Germany Pavilion near her wishing well. Even Jasmine has made an appearance in the Morocco Pavilion. It looks like Disney’s removal of the Princess Promenade is to allow the Princesses to return to their countries for socially distanced greetings.

While we’re all about seeing the Princesses, don’t forget to be on the lookout for other Disney characters that may make appearances in and around Future World, such as the sweet Winnie the Pooh trying to catch butterflies near the Journey Into Imagination With Figment attraction.

Character cavalcade opportunities are still currently available at Magic Kingdom Park and Disney’s Hollywood Studios. Plus, keep an eye and ear out at Disney’s Animal Kingdom as characters take boat rides throughout the Park’s waterways. Did you prefer the EPCOT character avalcade or would you rather find the Disney characters and princesses in their socially distanced character meet and greets?