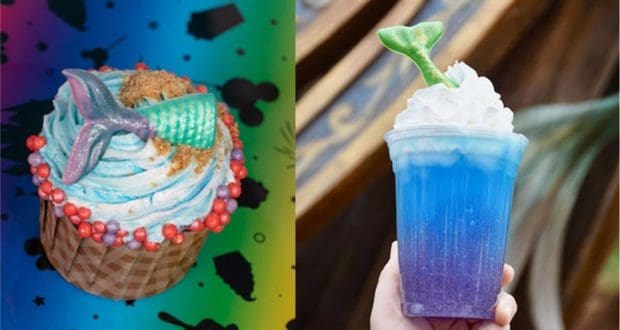 Bibbidi Bobbidi Boo! The Fairy Godmother must be looking out for all of us Disney Foodies as Walt Disney World has released the news that Disney Princess treats are coming soon to the Parks and Resorts. And that’s not all! Disney is preparing for a week of Disney Princess celebrations with their first-ever “World Princess Week” which begins on Monday, August 23. Who is your favorite Princess? Be prepared to hear all about her with exciting Disney Princess news including the chance to experience the new Princess Tiana-themed playground coming to EPCOT. Without further ado, check out the Disney Princess treats making their way to Walt Disney World’s Parks and Resorts.

The yummy sweet treats created by Disney’s talented pastry chefs will be available from August 23 to August 29 while supplies last. And if you’re ready to share your photos on social media, don’t forget to use #UltimatePrincessCelebration.

First up, head on over to Disney Springs where you’ll find two foodie favorite locations that have Disney Princess-themed treats including Amorette’s Patisserie and The Ganachery. At Amorette’s prepare yourself for the Princess Tiana Petit Cake with dark chocolate chiffon cake, raspberry mousse, raspberry pâte fruit, and chocolate crisp pearls. At The Ganachery you’ll be able to enjoy the Princess Chocolate Bars with Ganache chocolate bars featuring Jasmine, Ariel, and Snow White.

Ready for a little Disney Resort hoping? Here’s a list of tantalizing treats perfect for all the queens and princesses out there:

EPCOT has a fantastic variety of sweets including:

If you find yours spending time in all the glitz and glam of Disney’s Hollywood Studios, check out these delicious selections:

At Magic Kingdom Park – the most magical place for a princess to visit – you’ll find a great lineup of royal treats including:

Anyone else ready to treat their royal side with these heavenly choices? Invite your friends and have a one-of-a-kind Disney Princess party around the Parks and Resorts with a sweet treat or two… or more! While it may not go easy on our diets, we’re pretty sure a sampling of one of each is in the works next week. Enjoy, Disney Princesses and Princes!