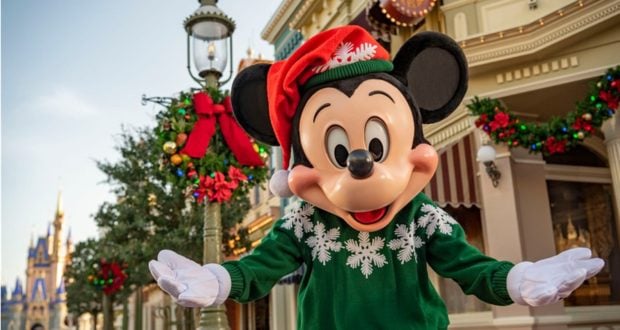 We may be just a couple of weeks away from Halloween, but it’s no secret that Christmas is right around the corner! As holiday decor fills stores around the globe, we’re just trying our best to hang on to Halloween and Thanksgiving. We will say however if there is one thing Disney fans typically know by now, it’s what their Walt Disney World Resort holiday plans are. This is why we’re surprised to see that with less than one month before the first party (November 8), no dates have sold out yet for Disney’s new special-ticketed holiday event called “Disney Very Merriest After Hours” at Magic Kingdom.

Walt Disney World previously announced they will be moving on from Mickey’s Very Merry Christmas Party with plans to introduce the new special-ticketed holiday event called, “Disney Very Merriest After Hours”. The after hours event will take place at Magic Kingdom Park and will “celebrate the holidays in the very merriest way at a new event featuring a themed parade, fireworks, and more!” Like most special ticketed events, Disney released the ticket sales well in advance so Guests can prepare for the holiday season ahead. Tickets for Disney Very Merriest After Hours went on sale on August 20. Typically when Disney releases a special event ticket, dates fill up rather quickly. For example, when Disney After Hours Boo Bash tickets went on sale select party dates sold out quickly. With these special events, we tend to see at least the first party night and the last party night sell out fast. Oddly enough, Disney Very Merriest After Hours party dates are all currently available.

So, what’s the hold up on ticket sales for Disney Very Merriest After Hours? One reason could be the reviews for Disney After Hours Boo Bash (the Halloween Party that replaced Mickey’s Not-So-Scary Halloween Party) haven’t been spectacular. Another likely reason based on what we’ve heard from Disney fans is the ticket cost. Ticket prices for Disney Very Merriest After Hours at Magic Kingdom Park range from $169 to $249 depending on the date you plan to attend the party. There is a slight discount for any Disney Vacation Club Member or Annual Passholder. In 2019, Mickey’s Very Merry Christmas Party tickets started at $94. Is the huge price increase the reason you haven’t purchased your tickets yet? As Disney rolls out Disney Genie+ and Lightning Lane expenses as of October 19, many Disney fans are feeling the need to keep their wallets close to them. A third thought is maybe Disney has increased capacity so much so for the special event that a date selling out isn’t as likely as it was for special-ticketed events in the past?

While Disney After Hours Boo Bash is currently without a special parade or fireworks, Disney has announced they will offer Minnie’s Wonderful Christmastime Fireworks and Mickey’s Once Upon a Christmastime Parade for Disney Very Merriest After Hours. While we’re thankful for the parade and fireworks return, it does still leave a bad taste as Disney fans have learned that Disneyland Guests out in California will have a chance to see and experience holiday fireworks and a holiday parade without paying the extra to attended a special ticketed event.

Disney has announced Disney Very Merriest After Hours as a chance to “Celebrate the holidays in the very merriest way at a new event featuring a themed parade, fireworks, Disney Character sightings, and more! Disney Very Merriest After Hours will take place from 9:00 p.m. to 1:00 a.m. on select nights, from November 8 through December 21, 2021. Ticket holders will be admitted to Magic Kingdom Park as early as 7:00 p.m. on the valid date of their ticket, giving them even more time to enjoy Park favorites before the event begins—including the new Disney Enchantment nighttime spectacular! These dated tickets do not require an additional day theme Park ticket or Disney Park Pass theme Park reservation.” And we must mention, Disney has said there will be complimentary snacks, specialty-paid holiday treats, and yes, Santa Claus will be there! More details and tickets are available here for the event.

Are you making plans to attend one of the Disney Very Merriest After Hours events? Unlike special ticketed events selling quickly in the past, why do you suppose Disney has yet to sell out for a single party date this year?