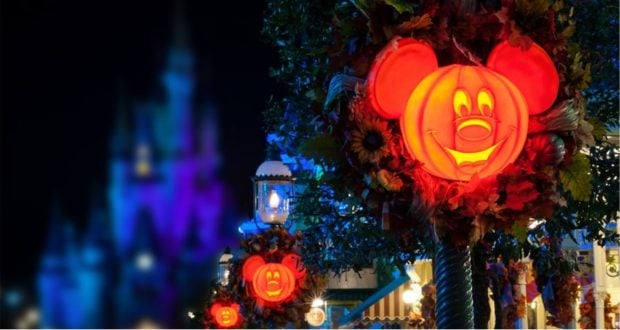 Disney fans were understandably disappointed when it was announced that Mickey’s Not-So-Scary Halloween Party would not take place this year. Instead, we learned that Disney After Hours Boo Bash would take its place in 2021. There were a lot of complaints because of the cost, which is significantly higher than the Halloween Party. It is similar to the cost of other Disney After Hours events. I’m a huge fan of Disney After Hours, so I bought my tickets the day they went on sale.

My daughter and I attended Disney After Hours Boo Bash on August 31. It was a warm, humid night, but it didn’t rain. With your ticket, you can enter the Magic Kingdom at 7:00, which was about the time that we showed up. Our event ran from 9:30 until 12:30, some dates start half an hour earlier. There were Cast Members outside of the entrance to the Magic Kingdom, directing people where to go. We scanned our MagicBands and then got our Boo Bash wristbands. Wait Times were low, so we rode a couple of rides and got dinner.

Happily Ever After currently runs at 8:45. On August 31 the fireworks portion of the show didn’t take place because of an earlier behind-the-scenes problem (see video here). I enjoyed watching just the projections, but I do understand why many Guests were upset. Still, Disney could have totally canceled. I give them credit for putting on a fantastic projections show.

Once Happily Ever After ended the front of the Magic Kingdom cleared out. Cast Members started to check for wristbands. It was like that for the first hour or so of Boo Bash, we had to show our wristbands in order to enter a new land or get in line for a ride.

One of the draws of the Disney After Hours events is that a limited number of tickets are sold, meaning low Wait Times. Boo Bash was by far the most crowded Disney After Hours event that I’ve attended, but the crowd was more than manageable. Most rides were walk-on. The longest Wait Time that we saw was for the Seven Dwarfs Mine Train, which was 15 minutes each time we checked.

Trick or Treating was a popular part of Mickey’s Not-So-Scary Halloween Party, and it is held during Boo Bash as well. There didn’t seem to be as many stations, but there was still a lot of candy! The stations are marked on the Boo Bash map, don’t forget to pick one up when you enter the Park. If you have allergies, ask for a teal bag. You’ll receive tokens at the Trick or Treat locations, which you can turn in at the end of the night for treats that you’ll be able to safely enjoy.

There are extra characters out and about for Disney After Hours Boo Bash. They are all socially distant, and the spots are marked on the map. The problem with socially distanced characters after dark is that it’s hard to get good pictures. We saw a few, but we decided not to spend too much time hunting them down because our pictures were coming out dark.

The Halloween Character Cavalcades are part of the fun. It was great to see Maleficent in all her fire-breathing glory! (The last time I saw her the fire wasn’t working.) The times for the cavalcades are listed on the map. We decided to watch the cavalcades in the middle of our evening. That way, we’d still have time at the end of the night to hit a few more rides. We also watched the Cadaver Dans, who performed in Frontierland. Their performance times are also listed on the map.

Popcorn, ice cream novelties, and bottled soda or water are included with your admission. There were plenty of stations throughout the Park. At first, it looked like the lines were long, but they moved quickly. Towards the end of the event, there were no lines for the snacks at all.

My daughter and I would usually end Mickey’s Not-So-Scary Halloween Party by riding Seven Dwarfs Mine Train, so we decided to keep up that tradition. The Wait Time when we got in line at 12:10 was listed as 15 minutes, but we didn’t wait that long. We got off and were able to ride one more time. It was the perfect way to end a fun evening.

A lot of people want to know if Disney After Hours Boo Bash is worth the price. In my opinion, it was worth every cent. Do not expect it to be the same as Mickey’s Not-So-Scary Halloween Party.  Three hours isn’t a lot of time, but you can do quite a bit if you decide what is important to you. I think that we did more in those three hours than we ever did at the Halloween Party. If Disney After Hours Boo Bash wasn’t sold out, I’d be tempted to buy tickets for another date. I already bought my tickets for Disney Very Merriest After Hours and I can’t wait!