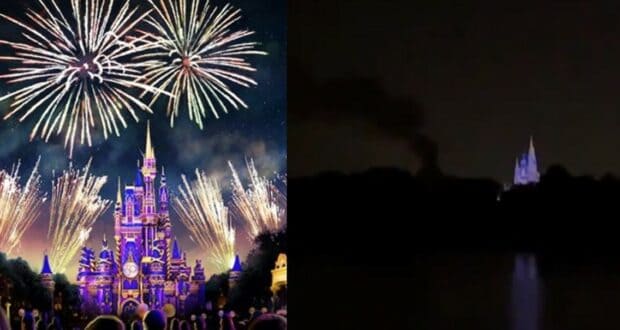 What’s makes a visit to Walt Disney World’s Magic Kingdom Park complete? The stunning nighttime spectacular lighting up the sky above Cinderella Castle of course! While fireworks have returned to Magic Kingdom since the Park’s phased reopening, Guests visiting the Park last night, August 31, were not able to see Happily Ever After fireworks. Walt Disney World put out an announcement and push notification via the My Disney Experience App yesterday for Magic Kingdom Guests stating that while Happily Ever After projections would still take place, any of the fireworks involved would not be part of the show. The reason was unknown at the time, but now we’re learning there was a backstage fire that caused the hold-up of fireworks for the Disney Park.

We previously shared the news that Disney announced they would be testing new fireworks on August 30 and September 1. The new show firework show replacing Happily Ever After on October 1, 2021, for the 50th Anniversary Celebration is “Disney Enchantment“. It seems like during the August 30 testing of Disney fireworks for “Disney Enchantment”, one of the fireworks launching areas caught fire.

Reporter Scott Gustin shares, “A fire backstage at a fireworks launch site last night is why there will be no fireworks during Happily Ever After at Magic Kingdom tonight. The projections will happen – but no pyro tonight.” With the shared video of the noticeable smoke as shown below:

Gustin goes on to share, “I don’t have any information about any possible damage to the fireworks launch site or the exact location of the fire near the launch site – but it is the reason fireworks were canceled tonight.”

Magic Kingdom’s new fireworks display, “Disney Enchantment” isn’t the only set of fireworks that are undergoing testing. EPCOT’s “EPCOT Forever” is being replaced by “Harmonious“. Each theme Park is scheduled to debut the new fireworks shows on October 1.

Our hope is that all those visiting Magic Kingdom today (September 1) will have the opportunity to see Magic Kingdom’s Happily Ever After WITH fireworks tonight! We’re curious to see if Disney will be testing “Disney Enchantment” fireworks once again tonight, September 1 as previously noted. We’ll keep you posted as we learn more about this news.