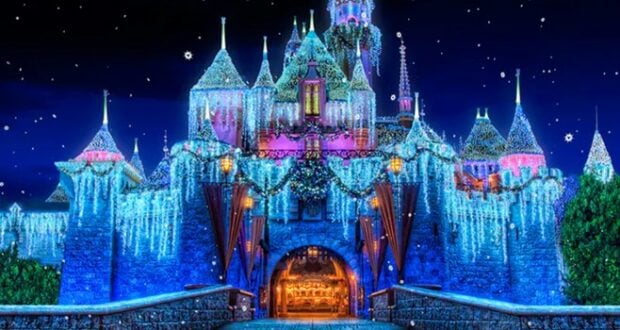 Calling all Disney holiday vacationers! As September kicks off, Disney is sharing all the holiday excitement set to debut in a couple of months. Disneyland has listed all their holiday celebrations kicking off on the same day as Walt Disney World’s merry season – November 12, 2021. As we comb through the holiday celebrations we’re surprised to see how much holiday cheer is on the way to Disneyland! A holiday firework show, a holiday parade, and a glistening Castle are in the works for Disneyland Resort this winter. And while, yes, Walt Disney World has announced the return of a holiday parade and fireworks – they are only available if you’re willing to pay for the special ticketed event.

Disneyland Resort has announced they will once again transform into a merry and magical place as Guests return to enjoy their Disney Park holiday season beginning November 12, 2021. You’ll have three more days to celebrate the Holidays, too, because they are extending it through January 9, 2022. As shared by Disney Parks Blog: “At Disneyland Park, nostalgic holiday magic shines brightly with the glistening Sleeping Beauty’s Winter Castle and a 60-foot Christmas tree on Main Street, U.S.A. Both make wonderful photo locations for that cherished memory of your Holiday visit. Entertainment making a comeback this year at the Park includes “A Christmas Fantasy” parade where beloved Disney characters join Santa Claus for a merry musical celebration down Main Street, U.S.A. You may also see Santa making other stops within the parks throughout your visit. For the perfect kiss goodnight, you will be treated to “Believe … in Holiday Magic” fireworks spectacular and magical snowfall over portions of Main Street, U.S.A. Additionally, seasonal transformations will happen once again at “it’s a small world” Holiday and the 20th installation of Haunted Mansion Holiday.”

Moving on over to Walt Disney World Resort. Let’s keep in mind that Disney World is gearing up for their special 50th Anniversary Celebration kicking off October 1, 2021. The celebration will last a full 18-months, taking us through the holidays. We’ll have a chance to experience new nighttime spectaculars including Magic Kingdom’s “Disney Enchantment” and EPCOT’s “Harmonious“. The holidays are still being celebrated, however unlike Disneyland Resort, if you want to see a special holiday parade and/or holiday fireworks, you’ll need to purchase a ticket to the special after-hours holiday party replacing Mickey’s Very Merry Christmas Party. This year, Disney World is introducing “Disney Very Merriest After Hours.” Disney previously shared, “Disney Very Merriest After Hours” will include the nighttime spectacular “Minnie’s Wonderful Christmastime Fireworks” and the special holiday-themed parade “Mickey’s Once Upon a Christmastime Parade.” Unfortunately, the only way to experience these holiday extras is to purchase the event ticket which ranges from $169 to $249 plus tax depending on the date selected. On the flip side, if you purchase a ticket to Disney Very Merriest After Hours, you will see two fireworks shows in one night including Disney Enchantment and Minnie’s Wonderful Christmastime Fireworks.

As far as the glistening Sleeping Beauty’s Winter Castle at Disneyland, we aren’t expecting the return of Disney World’s Cinderella Castle Dream Lights. Disney has announced special holiday projections will appear most nights on Cinderella Castle, alternating periodically with the Castle’s transformation into a Beacon of Magic.

So, what do you think? Is the trade-off of Walt Disney World’s 50th Anniversary entertainment and experiences worth pushing the holiday extras to a special-ticketed holiday event only? Or should Walt Disney World follow Disneyland’s example and roll out the holiday experiences nightly for all their Guests? As you begin planning your magical vacations, you can check out all the Disneyland Holiday details as shared via Disney Parks Blog here. Ready to learn more about Walt Disney World’s holiday offerings? Check out those details here. Happy planning, Disney Resort fans!

2021-09-01
Jamie Sylvester
Previous: EPCOT’s New Coaster Is In Its “Final Stages”
Next: Ready to Move to Lake Nona With Disney? This 2.7 Million Dollar Home Is Calling Your Name!