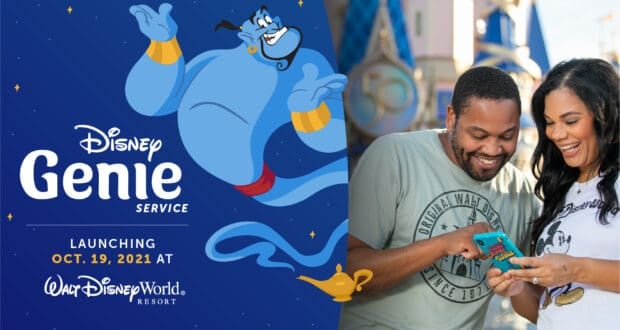 Disney Genie to Launch on October 19!

Disney Genie is going to officially launch on October 19 at Walt Disney World. The date for Disneyland has not yet been determined. The information was shared as part of a Zoom Meeting with several Disney Executives who have been working on the project. They also shared plenty of information on the new service.

During the meeting, it was stated that the goal of Disney Genie is to optimize Guests’ time and maximize Guests’ fun. It will be a lot like a navigation app on your phone, with updates depending on where you are and what you are interested in. It will match your must dos and interests, and find ways for you to get the most out of your day. Any plans that you currently have such as dining reservations will be taken into account when the suggestions are made. 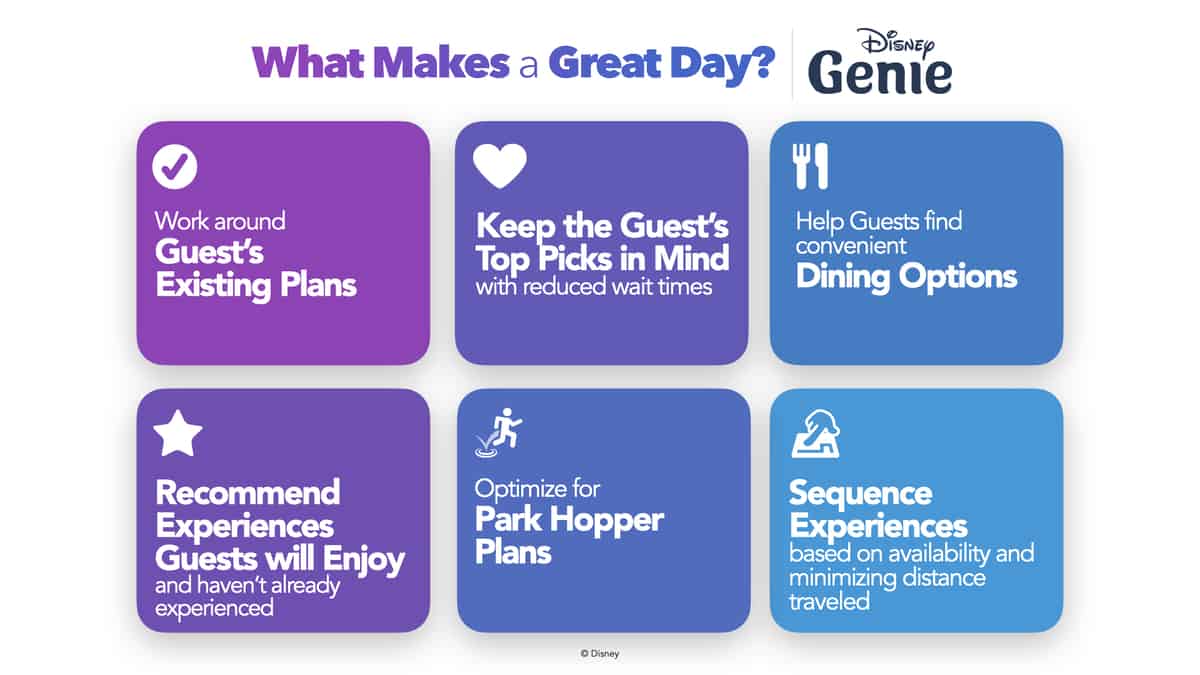 Disney Genie will use algorithms to determine what you should do and when. The suggestions will be not only for attractions, but dining will be included as well. If you don’t like a suggestion, you can swap it out for something else. If you aren’t sure why something was suggested for you, there will be a feature where you can find out why it was a suggestion. Current Wait Times will be available, as well as forecasted Wait Times. There will also be a Tip Board to help you figure out your next move. The Tip Board will give the status for each attraction or restaurant. Another nice feature will be that if a full service restaurant has spots available on the Wait List, you will be able to join through Disney Genie. No more “you’re aren’t close enough” messages!

Suggestions will change based on other factors as well. If storms are rolling in, an indoor attraction could be recommended. If a ride is down Disney Genie will let you know and adapt as needed. You won’t have to walk across a Park, only to discover that you can’t ride.

If you plan to Park Hop, Disney Genie is adaptable for that as well. You can include the time that you plan to hop and which park, and your suggestions will be updated. If you change your mind it is easy to put that information into Disney Genie and you will have new recommendations appear. 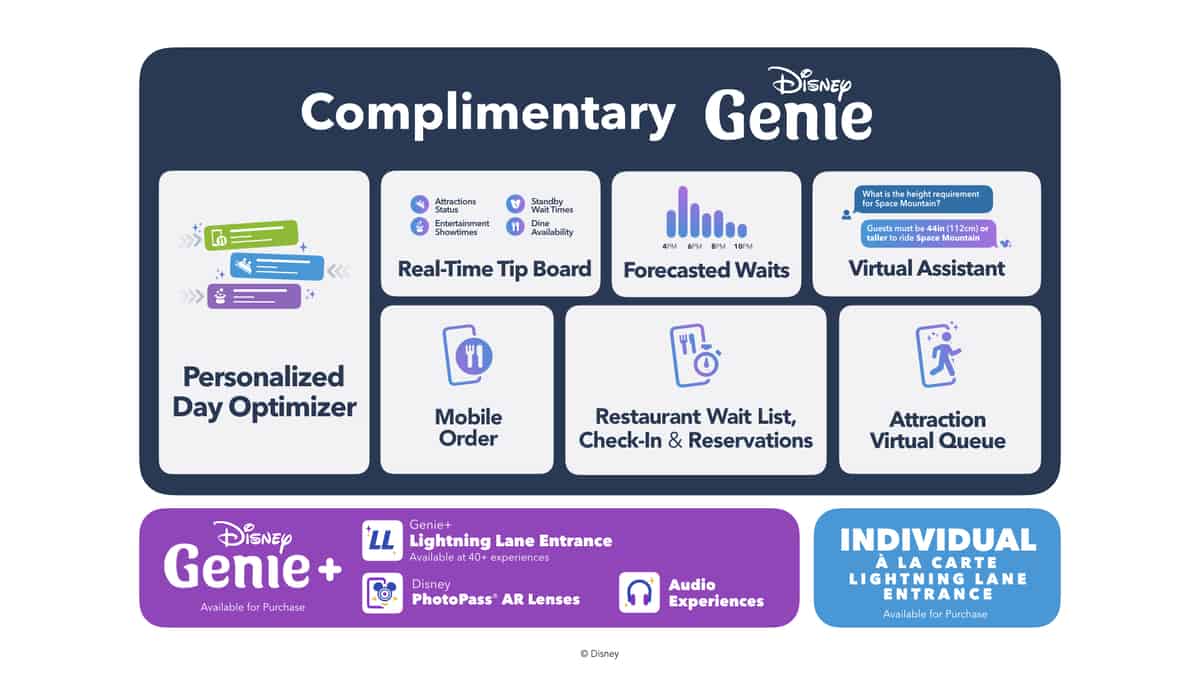 Don’t worry that Disney Genie is going to cause long lines because it recommends the same things to all Guests. The system will take that into account, so everyone will not receive the same recommendations at the same time.

Disney Genie will be complimentary. The free service will include personalized optimizations for your day. The Tip Board and many other features will be included as well. If you’re worried about your battery, the service will update only when you open it on your phone. That will help to prolong your battery life.

The paid extra that everyone is talking about is Disney Genie+. This will cost $15 a day at Walt Disney World. You do not need to purchase it for the length of your ticket, you’ll just buy it the day of. There will be no special add-on at launch for Annual Passholders, they also will have to pay each day they want to use it. The main draw of Disney Genie+ is that Guests will have access to the Lightning Lane. You will be able to pick one attraction at a time, and will be given the next available time. If your return time is too far away you will be able to make a second selection after two hours. The system will work much like the old FastPass system did, you cannot make selections until the day of your visit. One person can make Lightning Lane selections for everyone in a party. If you want to break the group up, you will be able to do that as well. 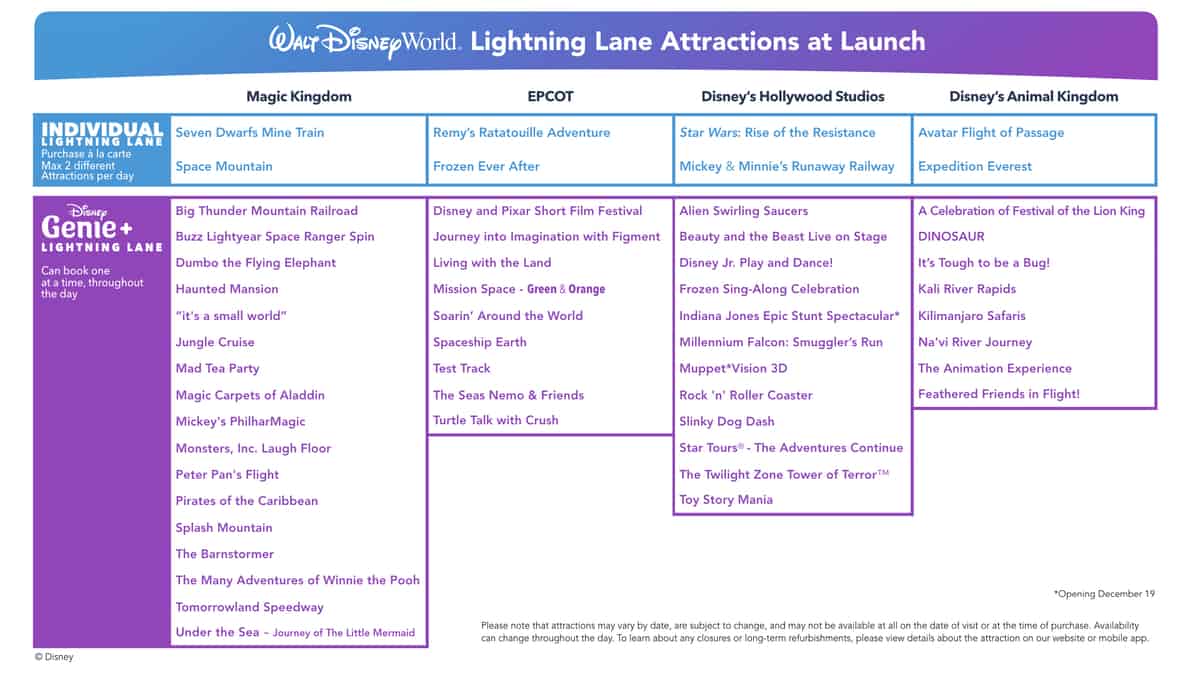 Another extra in Disney Genie+ will be Augmented Reality Lenses. There will be 20 to choose from. You will be able to turn yourself into the Genie, or enjoy a plate of virtual spaghetti with your favorite Tramp. Most of the lenses are for use in the Theme Parks, but some will be available outside of them.

There was also an update on the Individual Lightning Lane attractions. These will be available for purchase a la carte, so to speak. You will be able to purchase a maximum of two different attractions per day. At launch the Individual Lightning Lane choices will be as follows; Seven Dwarfs Mine Train and Space Mountain at the Magic Kingdom, Remy’s Ratatouille Adventure and Frozen Ever After at EPCOT, Rise of the Resistance and Mickey & Minnie’s Runaway Railway at Disney’s Hollywood Studios, and Avatar Flight of Passage and Expedition Everest at Disney’s Animal Kingdom. The price point was not mentioned, but will reflect how busy the Parks are expected to be.

More information on Disney Genie and Disney Genie+ will be released in the coming days. The new service is meant to help you to make the most of your time at Walt Disney World. It is not mandatory to use, but since the basic service will be free we recommend that you try it. You could end up saving a lot of time.