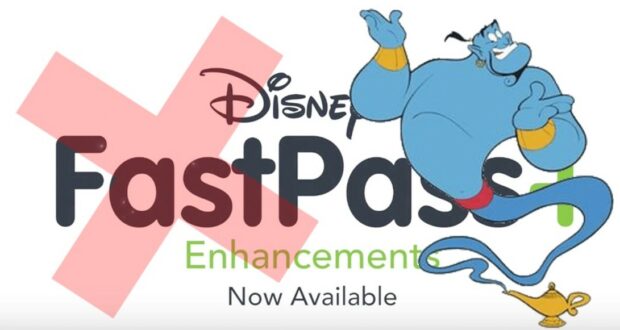 Well, Disney fans, it’s time we turn another chapter at Walt Disney World Resort. When the Disney Parks closed in March 2020, we had no idea that would be the last we’d have a chance to experience the Disney FastPass program. The complimentary program was a favorite of ours (and especially our kids!) as who doesn’t love to skip the line. When the Disney Parks began their phased reopening in Summer 2020 and FastPasses didn’t return, we were naive in thinking the FastPass program would return as usual soon enough. Fast forward to the present day, a new way to skip the line has been unleashed as of October 19, but it’s not the freebie FastPass program. The Disney Genie has arrived.

While yes, Disney has used COVID to reevaluate their Parks and adjust accordingly, Disney fans can’t blame COVID for the addition of the Disney Genie. Actually, Disney first announced the Disney Genie back in August 2019. At that time, however, it was only discussed as a new mobile addition to help Guests navigate the Parks and provide a customized itinerary. Now, we know that the Disney Genie has three parts to it. First, Guests can experience the complimentary Disney Genie within the My Disney Experience App (there is no separate Disney Genie App). This free service will be available to help Guests optimize their time in the Parks. Secondly, is the Disney Genie+. Disney Genie+ is basically the former FastPass system that is no longer complimentary. The cost will be $15 per person per day. By purchasing the Disney Genie+, you’ll have an individual attraction selection from 40 plus experiences to choose from. Thirdly, enters Lightning Lane. Two attractions in each of Disney World’s Park that are not part of the Disney Genie+ will have an a-la-carte option to purchase a chance to skip the line. Pricing for these individual attractions will vary from $9 to $15 per person.

The loudest complaint about the new Disney Genie is of course the upcharge. Disney has dropped complementary services rather quickly lately from experiences like the airport transportation on the Magical Express ending this year, free Resort Guest and Passholder Magic Bands, and free Guest parking at Resorts. The new Annual Passholder program has dropped the free PhotoPass service and special events have seen an increase in price. While yes, we agree that there is no way we will be able to purchase Lightning Lane passes for our family of four at $48 to ride the three-minute attraction Seven Dwarfs Mine Train at Magic Kingdom Park, it is the confusion behind the new Disney Genie that has us scratching our heads as to why Disney went this route.

Yes, we don’t like having to pay $15 per person for the Disney Genie+ if we choose to, but trying to explain the intricacies and details of the new service including the Disney Genie, Disney Genie+, and Lightning Lane selection means for each Disney Park is rather mind-numbing. We feel for all those new Disney World fans out there! Like Disney World’s neighboring competitor, Univeral Orlando Resort, we’d actually prefer a one-fee ticket deal to experience whichever rides we would like however many times, at whatever time we would like. Plus, the pass to skip the line is FREE for select Universal Resorts Guests staying at their version of “deluxe” resorts.

Keep in mind Disney Genie is now available at Walt Disney World Theme Park but will launch at a later date at Disneyland Resort. Regardless of moans and groans, the change is here and the new era of the Disney Genie has arrived! Are you excited about the new Disney Genie experience and ready to optimize your Disney day? Our recommendation is to do your best to embrace portions of the new Disney Genie service as it works best for you and your travel party. Fingers crossed the Genie program will be as seamless for Guests as possible during their Disney vacation!