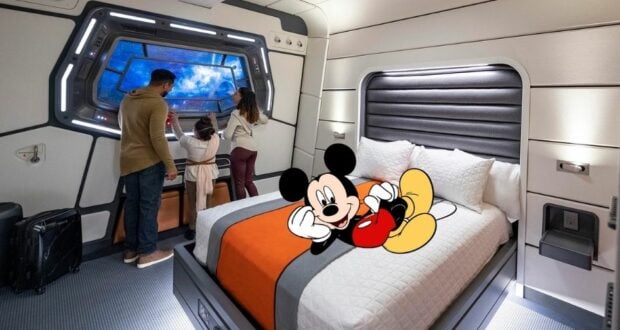 Disney Fans Are Liking What They See! Starcruiser Is Fully Booked for MONTHS

Walt Disney World Resort is buzzing with Star Wars excitement as Disney prepares to open its newest Resort Hotel experience, Star Wars: Galactic Starcruiser. What was met with some Disney fan uncertainty… it is now clear Star Wars fans are coming out in droves to join the experience.

Recently, select social media influencers were invited to stay as Guests and experience Star Wars: Galactic Starcruiser prior to its grand opening on March 1, 2022. Prior to the media coverage, it was normal to see a mixed bag of reactions about the 2-night all-immersive Star Wars storytelling experience.

The high price tag, the interesting characters, odd but unique merchandise, and weird food such as blue shrimp… the experience surely isn’t all it is chalked up to be, right? Well, after more details of the Starcruiser were released, it seems Disney fans are truly liking what they see.

Disney CEO, Bob Chapek shared the Starcruiser experience is like a Disney Cruise and a Disney Resort all bundled into one with loads of entertainment. Many bloggers feel the experience was like being in a video game and truly became a part of the Star Wars storytelling that unfolded around every corner.

Now, as shown in the screenshots below, the Star Wars Hotel is BOOKED full for March, April, May, and June, with the first openings currently available in late July.

Arrive at the Walt Disney World Resort terminal, board a launch pod and rendezvous with the magnificent Halcyon starcruiser. Stay in a cabin or suite with an exquisite view of space. Throughout the ship, you’ll interact with an eclectic collection of characters, sit down to exotic galactic cuisine and perhaps even plot a secret mission together.

As the itinerary continues, you’ll take the story further and deeper. Choose your path. Seek out the inner workings of the legendary starship, learn the traditional art of wielding a lightsaber and even jump on a transport to the planet Batuu—where your mission continues at Star Wars: Galaxy’s Edge!

Do you have reservations booked for this new Disney vacation experience? It seems like for many it was worth the extra cost after all!