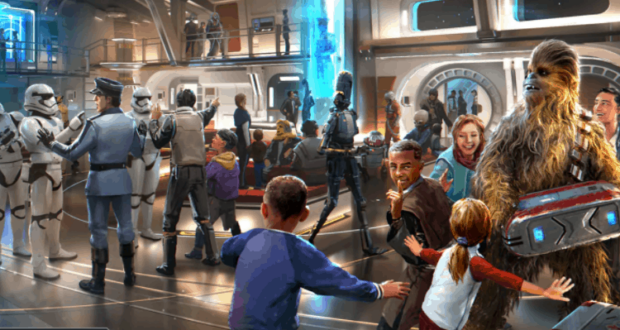 This is the one we’ve been waiting for!

Whether you’re an all-out, sold-out Star Wars fan or one of those who’s just beginning an affinity for the galaxy far, far away, the news about a Star Wars-themed hotel at Disney World that is both meticulous in detail and 100% immersive strikes a cord of excitement within all of us!

That’s right! The very first adventurers will depart on March 1, 2022!

Your choices determine what happens during your experience!

The adventure and experience at the Galactic Starcruiser promise to be unlike anything we’ve ever experienced at Disney World. According to Disney, the new Star Wars-themed hotel will be so much more than a hotel:

While your story unfolds, you’ll have the power to choose your path. Will you follow the rule of the First Order or join the Resistance in a secret plot? Strike a bargain with a gang of smugglers or sit back, sip a cocktail and watch it all from a safe distance?

The choice is yours as you step aboard the most immersive Star Wars story ever created—one where you live your own Star Wars adventure!”

We like the “choose your own path” feature in the experience!

Star Wars: Galactic Starcruiser opens to travelers on March 1 of next year! Make your bookings early, beginning October 28, to be immersed in the world of Star Wars.